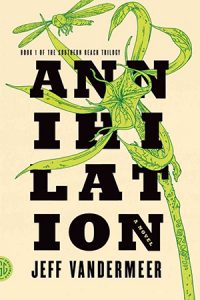 I bought the whole Southern Reach trilogy as one single book, but I have only made it through the first one so far. Still, I didn’t want to keep you waiting for my review as I am not sure if I will read the rest of it to be honest. But first, here’s the blurb so we all now what the book is roughly about:

Area X has been cut off from the rest of the continent for decades. Nature has reclaimed the last vestiges of human civilization. The first expedition returned with reports of a pristine, Edenic landscape; all the members of the second expedition committed suicide; the third expedition died in a hail of gunfire as its members turned on one another; the members of the eleventh expedition returned as shadows of their former selves, and within months of their return, all had died of aggressive cancer. This is the twelfth expedition. Their group is made up of four women: an anthropologist; a surveyor; a psychologist, the de facto leader; and our narrator, a biologist. Their mission is to map the terrain and collect specimens; to record all their observations, scientific and otherwise, of their surroundings and of one another; and, above all, to avoid being contaminated by Area X itself. They arrive expecting the unexpected, and Area X delivers—they discover a massive topographic anomaly and life forms that surpass understanding—but it’s the surprises that came across the border with them, and the secrets the expedition members are keeping from one another, that change everything.

Sounds exciting, doesn’t it? That’s what I thought, but sadly it isn’t. At the beginning the reader get introduced into the rather strange expedition and I got excited and hooked by the unknown world the group are discovering. There are mysteries building up and I started to look forward what’s it all about.

And that’s where the book became a little dragging. The story is confusing, there is no golden thread and it feels like the first hundred pages could be narrated in twenty and there would still be a very well described world to be imagined.

What I liked was that most things going on were scientifically plausible and you can tell that someone did his research. For example this:

“I was convinced that when I wasn’t looking at them, these cells became something else, that the very act of observation changed everything.”

That’s nearly quantum mechanics, isn’t it? But this scientific style and the anonymity of the characters is turning the novel into a heartless story which is hard to read. It took me ages to get through the book as I didn’t get it somehow and therefore got bored (and I wouldn’t shift the blame on my lacking scientific knowledge, those who know me are aware that I am quite interested in science).

On the other hand there’s always this mystery about the area that you want to finally solve, which makes you read on anyway, so it’s not all bad. Just that you don’t find out at the end of book one, so you have to keep on reading if you want to know.

Reading the story is definitely a weird experience. If that was the goal, then well done. Nevertheless, I’m not sure if I can make myself continue reading the next part though – at least not very soon as I am afraid it will be similarly straining to read, but on the other hand I still want to know what’s happening to some extend.

I want to end this with my favourite quote taken from the book:

“We all live in a kind of dream. When we wake, it is because something, some event, some pinpick even, disturbs the edges of what we’ve taken as reality.”

That’s something to think about, isn’t it?

Let me know if you’ve read the book as well and what you’ve made of it – leave a comment below.