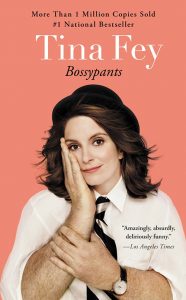 Tina Fey’s autobiography Bossypants is probably the best biography I have ever read. At least so far but I think it will be hard for every other one to live up to it.

For those of you, who don’t know who Tina Fey is: She is an American writer, actress and comedian. She wrote for example Mean Girls and sketches for Saturday Night Live. She also created and acted in the brilliant series 30 Rock and Unbreakable Kimmy Schmidt. I have loved everything she wrote or took part in so far, especially 30 Rock, which why I bought her book. I’m glad I did.

In Bossypants Tina Fey tells the story of her growing up in a small town in Pennsylvania, going off to college, working at the YMCA and then at a theatre in Chicago until making her way to work in television. And of course there’s loads of stories about Saturday Night Live and 30 Rock.

But it’s not only these stories to the parts of her CV, there’s also tips and tricks on growing up, being a woman [sorry, male readers] and a (working) mum [sorry again].

It’s hard to pick a favourite chapter, but I think one of mine is certainly “Dear Internet” towards the end of the book, where Tina answers to comments about her on the internet – so pert and amusing. I have picked one of her answers for you to get a first impression of what it is like to read this book. This is the one I enjoyed the most:

Tina’s answer: “Dear Centaurious, first let me say how inspiring it is that you have learned to use a computer.

“I hate for our correspondence to be confrontational, but you have offended me deeply. To say I’m an overrated troll, when you have never even seen me guard a bridge, is patently unfair. I’ll leave it for others to say if I’m the best, but I am certainly one of the most dedicated trolls guarding bridges today. I always ask three questioins, at least two of which are riddles.

“As for ‘ugly, pear-shaped, and bitchy’? I prefer the terms ‘offbeat, business class-assed, and exhausted,’ but I’ll take what I can get. There’s no such thing as bad press!

“Now go to bed, you crazy night owl! You have to be at NASA early in the morning. So they can look for your penis with the Hubble telescope.”

Brilliant, isn’t it? I’m also loving the lists she has made. For example the one about the bodyparts she’s grateful for, the one about what skills you need for a photo shooting or her “Twelve Tenets of Looking Amazing Forever”. The comparisons she makes throughout the book are brilliant and hilarious. You can imagine her telling you the story and gesturing wildly in front of you whilst reading. If you choose to read it – because there is also an audio book version of Bossypants. It is read by Tine Fey herself and it’s even better than the book as she’s an amazing narrator. I read the book once and listened to the audio book recently and I enjoyed both.

I adore Tina’s way of storytelling and this book is just as superbly written as all the other things she wrote. If you’re into comedy and funny stories you should really read this book (and watch some of her shows or films if you haven’t already).

If you have read Bossypants already, I would love to hear your thoughts about it. And what do you think of Tina Fey in general? Let me know in the comments below.