Today it’s all about one of the books I’ve read whilst on holiday in Italy for the last 10 days.

This book is one of the most wonderful and inspiring books I’ve read in quite a while. Seriously. Actually I can’t even remember when I was amazed by a book so much.

I received the book by the publisher (Suhrkamp/Insel) in exchange for an honest review and I couldn’t have wished for a better one. So thank you for this opportunity!
Panorama City (German title: Ein Mann von Welt) is the story of Oppen Porter – told by himself. Literally. It’s a transcript of tapes he’s recorded for his son, because he’s going to die. You can find more information on the book and the author here or on Goodreads.
Oppen Porter is a simple man who has gone to the big city to become a man of the world. He has to change is lifestyle to live there, he gets a job and he meets new people. He learns a lot. Not just about himself, also about life. And I reckon that’s why he wants to pass everything on to his son, so that he doesn’t have to struggle to find that knowledge as well.
The language of the book is shaped by Oppen’s personality, which is one of the many things I amired about the book. The writing style is feisty, light, quite simple and sometimes a bit confusing, just like the main character. It would have been weird if a guy who’s apparently a little bit retarded had told his story in a sophisticated way. The style of the narration does a lot to whole book, it turns it into a very realistic tale.

I can see Oppen Porter standing in front of me. This humble, lanky, naive young man trying to get his life right. 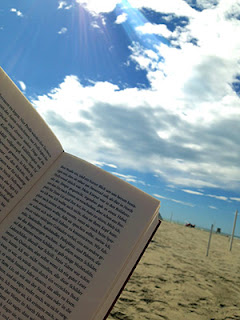 Oppen’s story is full of little nuggets of wisdom. I could have marked a quote on every second page if I had a highlighter on the beach with me. Lucky you – I didn’t, thus I won’t spam you with quotes now. But here’s two of the most philosophical ones about life:

– One of the properties of life is that there’s phases where nothing changes for a long time and suddenly everything changes.

“Eine weitere Eigenschaft ist, dass jedes Ereignis, gleichgültig wie klein es sein mag, auf eine andere Weise passieren könnte, und dann wäre alles, was danach kommt, anders.”
– Another property is that every event, unconcerned how small it is, could happen one way or the other and then everything that comes afterwards would be different.I believe I’ve actually learned something about life whilst reading this book and little Juan-George will learn a lot from it as well if he gets to hear it one day. And if it was a true story, which it isn’t, but I happen to forget it sometimes, because I got lost in the book so much and actually believed it’s true.

The whole of Antoine Wilson’s novel is very charming, with likeable and real characters, educating and wonderfully philosophical. You can’t help but smile about all the little anecdotes and Oppen’s experiences give you food for thought.

I can’t recommend this book enough. You’ve got to read it. It’s not one of those thrilling ones or super romantic lovestories, but it’s much more. It’s a story about life. Real life.

. Or of course in your local bookstore.

If you’ve read the book, don’t forget to leave a comment about what you thought of it. And maybe you know some other books that are inspiring in a entertaining way. Please leave your recommendations as well, I’d love to read more books like that.

The 5 earworms of the last weeks