The Invisible Man by H.G. Wells

“With his face swaddled in bandages, his eyes hidden behind dark glasses and his hands covered even indoors, Griffin, the new guest at The Coach and Horses, is at first assumed to be a shy accident-victim. But the true reason for his disguise is far more chilling: he has developed a process that has made him invisible. Driven to murder, the horror of his fate will destroy his mind…”

That’s what it says on the back of the penguin edition and surely a good short introduction to the book.

The story itself is quite good and I’m sure that the simple thought of an invisible man running around town threatening people was very scary indeed in 1897. I reckon nowadays it has lost a bit of it’s frightfullness somehow, but it’s still alright.

The whole story shows how the wish of being invisible, which probably every child has at least once, can turn into something bad and drive you insane once you’re actually invisible. And it might also refer to scientific discoveries in general. You have to mind the consequences and think every thing through.

What’s also good about the story is the confrontation of Griffin the rather mad and evil scientist and Dr. Kemp, the good one, who is strongly against science that’s lacking morality. Kemp is my favourite character in the book and especially one quote stuck to my mind:

“I never blame anyone,” said Kemp. “It’s quite out of fashion.”

Thank you for that, Mr. Wells. It’s so true. Don’t always blame other people, act responsible and you won’t have to. 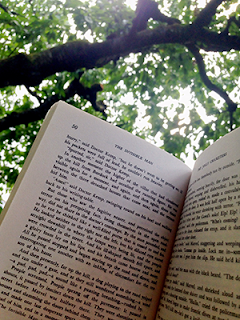 However (and I somehow feel bad for it), I can’t give this book more than two hearts. It’s quite a difficult read due to the language, which might be a problem with a lot of old books, but with this one I got a bit confused by the various narrative perspectives as well. Normally I like getting more than one side of the story, but it shouldn’t let you loose the thread like it does in this one. And thinking about it, the narrative style and the somehow scrappy narration might be the bigger problem than the language itself. I’ve read The Time Machine by H.G. Wells a while ago and I didn’t struggle that much with reading it that much and the whole story was way more fascinating than this one.

Nevertheless this one is also another story of what someone would do, if one gets thrown into a very unlikely situation and that’s what I like about it and about H.G. Wells in general.
His stories are not really about great scientific inventions, they’re more about the people being confronted with it. He throws his characters into very unlikely situations and then examines how they behave.

This act of studying his characters and the progress they’re making if it’s in a good or bad way is what I like about Wells’ books and that is also why I’ll continue reading them even though this experience was a bit of a dreadful one. Maybe the next one from the box will be a more exciting one.

Have you read any of H.G. Wells books? Did you like them? Let me know in the comments.