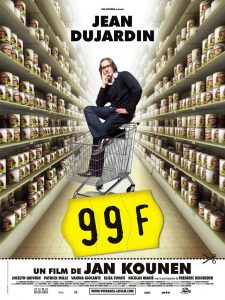 This was definitely one of the oddest films I have seen in a long, long time. The film should be satire on the modern advertisement industry, but it felt more like an endless drug trip. Not that I know how that feels, but that’s how imagine it to be like.

The film is about the advertisement designer Octave Parango, who’s played by Jean Dujardin, who you might know as the Oscar winning actor from “The Artist”. He has a very highly paid and easy-going job, which allows him to have a life full of parties, drugs and one-time sexual relationships. But he starts to rebel against himself and his life and kind of destroys everything or not. I didn’t really get it and the film’s got two endings, so that’s been confusing.

The good thing about the film was definitely the acting. It was totally believable and I wasn’t sure if they weren’t really on drugs. But I didn’t like the story line, even though it might show how insidious the marketing industry is.

So feel free to watch it and tell me I’m wrong with disliking it, but don’t tell me I didn’t warn you.