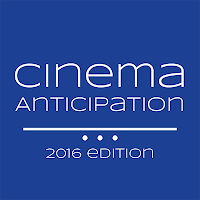 After all the new trailer releases in the past week I thought it would be nice to share the films with you that I am really looking forward to during the rest of this year.

There’s some amazing movies coming up and I am already very excited. It’s a great mixture of drama, comedy thrillers and science fiction and I hope you enjoy a little trailer parade.

I can’t wait to watch all of these films – here are the ten most anticipated ones (in order of release date).

The Lady in the Van

Release date: 14th April
This film has already been playing in the UK, but it starts today in Germany and I’m eager to see it. The story is so odd and I really adore Maggie Smith, hence I hope it’s a good one. And I hope the cinemas in my town decide to show it.

Release date: 3rd June (US/UK) / 23th June (Germany)
The trailer aready made me cry and the book was great. I hope the film will do it justice and not be awful like it was the case with P.S. I Love You.

Release date: 10th June (US) / 18th August (Germany)
I enjoyed the first one as you can read in my review. As always I am slightly afraid that the sequel will ruin it, there only is a few that are good – hopefully this will be one of them.

Our Kind Of Traitor

Release date: 7th July
As you probably remember froom my post on The Nightmanager I am a fan of John Le Carré’s novels and always up for a good film/series adaption. Our Kind of Traiter is based on the novel of the same name and I am really looking forward to it.

Release date: 22th July
I know people say you can’t be both – a Star Trek and a Star Wars fan. But I consider myself that even though I might like Star Wars a little bit more – shhhh!
Anyway, the trailer for Star Trek Beyond looks great and it’s going to be the perfect thing to do if summer isn’t treating us with sunshine.

Release date: 20th October
This film might be the best comedy of 2016 or the worst sequel ever, I’m not sure yet. As I said before, sequels make me anxious. But I loved the Bridget Jones films so far, I am quite excited about the slight casting change and hopefully therefore this will be a good one as well.

Release date: 28th October (Germany, UK) / 4th November (US)
As a fan of Benedict Cumberbatch and a lover of superheroes and the Marvel Cinematic Universe this is the film whose release is making me most excited – and the trailer is stunning. It looks like a mixture of Inception, Matrix and Harry Potter paired with Sherlock Holmes; it’s got a marvellous cast; it’s going to be legendary!

Release date: 28th October
After postponing the release last year because of Star Wars, the next Robert Langdon installment should be on it’s way this year. There is still no trailer and I am honestly wondering if this film will really be released in October, but I really hope so.

Fantastic Beasts and Where to Find Them

Release date: 17th November
Which Harry Potter fan wouldn’t want to go back into the magical universe? And what’s better than a sequel? Yes, a spin off because it’s unlikely to ruin the original story. And to be honest Eddie Redmayne is quite cute so why wouldn’t you want to watch the film?

Rogue One: A Star Wars Story

Release date: 12th December
Star Wars has been my first ever adult cinema film and I am so happy they decided to revive it. The Force Awakens last year was great and I can’t wait to see more. I know this is not the sequel (we have to wait one more year for that), but it’s great that there still will be a new Star Wars story out there this year and I love the woman power going on in the trailer.

So these are my picks. What would have been yours? What’s the film you are most looking forward to this year? Let me know!