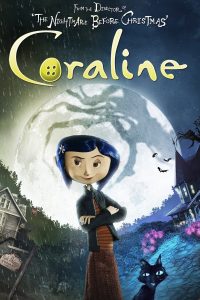 Coraline is a fantasy animation film from 2009 and it’s the one I go back to when I need a bit of creepy cuteness.

The story of the film by Henry Selick (Nightmare Before Christmas) is based on a book by one of my favourite authors – Neil Gaiman. He writes mainly science fiction, fantasy and comic books, but he also writes for radio and films. For me it all started with his novel The Ocean at the End of the Lane. Now, I am hooked to all his stories. Also, Neil Gaiman has written an episode of Doctor Who and of course this has moved him up a few places on my favourite writers list.

Coraline is one of his books for children, but they are very well suitable for adults too. It tells the story of a girl that moves to a new house with her parents. There, she discovers another world, that exists next to the one she is living in. It is a world full of uncanny secrets and Coraline finds herself trapped between two different realities.

The stop-motion film is a masterpiece within the area of creating a completely different world. It looks very special. But not only the looks of the film are very good. The story has great characters. Especially Coraline is actually a very complex character. On the one hand, she is just a normal little girl, who is bored and annoyed by her parents. But on the other hand she’s that courageous, clever and curious person, she needs to be. She has to decide what’s important in her life and how to treat others, which is a good lesson for everyone.

I really like the film, that’s for sure. Nevertheless, I think it’s a little bit too creepy for little children. There are scenes where even I didn’t want to look or got a bit scared.

All in all, Coraline is certainly a great adventure and a tale about family and friendship everyone, who likes films in the style of Henry Selick or Tim Burton should have seen. Just don’t watch it with a six year old, it could be too much.

Have you seen the film? Let me know your thoughts in the comments below.