Who does’t know them? Who doesn’t think they’re cute? What am I talking about? The Minions of course!

I’ve been to the cinema last Saturday with two friends to finally watch the Minion film. I was looking forward to see it since May, because when I was in London back then there were things with Minions on it all over the city. Then, when it came out, I had no one to go to the cinema with and let’s be honest, who likes going to the cinema on their own? Therfore I had to wait till last weekend until I’ve finally found two victims. And I loved it, I hope they did as well.

If I had to rate the film as an adult film, I’d give it two to three hearts and all of them just for cuteness. The film is lacking content, the whole story could be put into a twenty minute short. And the minions talking like babies could get quite annoying sometimes. But thankfully it’s a kids movie and as such it’s getting five full hearts from me.
It’s got all a great kids film needs. A story about the struggle in life, friendship and adventure. And it’s certainly entertaining, I was laughing from the beginning to the end. Honestly, I started laughing when the Minions started “singing” the Universal music when the film started.

For those who haven’t seen it and want to know a bit about the story: The film first shows the evolution of the Minions and how they were always looking for despicable bosses, but they always couldn’t keep them long. When they couldn’t find a new one they got really depressed and sad, which is why Stuart, Kevin and Bob head out to find a new evil boss for all of them. They take to the road and on a convention for villians they become recruited by Scarlet Overkill to steal the crown of the queen of England. And the chaotic journey continues. 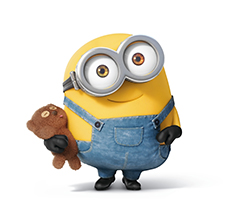 As I said, not a deep story and also a quite predictable and easy one, but let me say it again: It’s for kids. Even though us “adults” seem to enjoy it even a bit more. Maybe because we can be a little childish whilst watching the film, and who doesn’t like that?

And even though it’s lacking a bit of content it managed to give everyone a little history lesson at the beginning, going through all the big evil personalities in the past whilst the Minions were hopping from one boss to the next.

Additionally, there’s so much detail in the film. I admired the little funny and kind of historic scenes like the one with the faked moon landing and the one with the Minons disturbing the Beatles at Abbey Road. Little treats for the adult watchers.

All in all it was a joyous cinema night and I felt like a happy little kid. I don’t care if that’s silly, I loved it 😉

So yes – the Minions – you either love them or hate them. What about you? Are you a lover or a hater? Or one of the rare people inbetween? Leave a comment below.

And for all those who can’t get enough of the little rascals: There’s a game called “Minion Rush” for Android and iOS, which is quite fun. It’s like Temple Run, but with levels, quests, loads of gadgets and of course Minions.