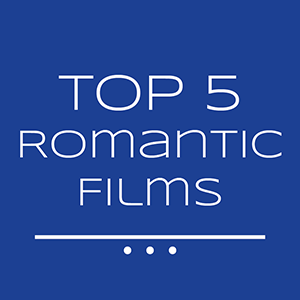 It’s this time of the year again. The days are getting shorter and colder and greyer. All you want to do now is sit on your couch, drink tea, eat chocolate and watch a good romantic film to cuddle with your blanket (or another person 😉 )?

I think I’ve got just the right ones to watch for you. I’ve been looking through my DVDs and picked my top 5 cute, entertaining and moving films about love.

And here they are: 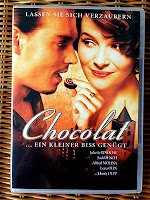 Chocolat is romantic drama about a woman opening a chocolaterie in a small French village – sounds good for eating chocolate, doesn’t it? And it also features a good looking Johnny Depp and well acting Judi Dench, isn’t that enough already?

This film was actually the one which made me start this blog nearly four years ago. A review of it was the first post ever made on here on 11th December 2011. Where has the time gone… 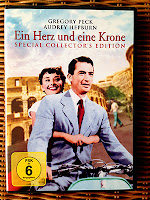 This is an old but definitely good one.

It’s a romantic comedy from 1953 starring Gregory Peck and Audrey Hepburn. And she’s also got an Oscar for her performance in the film. What could you possibly want more?

I’m not even going to tell you what it is about. Just watch it, if you haven’t.

I don’t know how often I’ve seen this one. My mum loves the film and we watched it together a few times when I was a kid. I loved the story and Richard Gere of course, even though he could be my dad – I bet my mum still wishes he was.

If I don’t know what to watch and need a bit of fairytale in my life I grab my Pretty Woman DVD. Or the one of the No. 1 film of this list.

Most of you will probably know it already. But if not: Pretty Woman is about Vivien (Julia Roberts), who is a hooker and gets hired by a wealthy businessman to be his escort for a few days. What happens next might be obvious, but it’s of course not going to be an easy road there. It’s funny, sad and beautiful. Just everything a good fairytale needs. 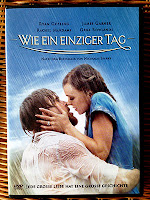 This one is based on the Nicholas Sparks novel with the same title. And it’s one of the better films versions of his books.

I like this one, because it can keep up with the book and is beautifully done.

The story is about a young couple (Ryan Gosling and Rachel McAdams) who fall in love in the 40’s. It’s told by an elderly man during his visits at a friend’s nursing home room. It’s a beautiful story and if you’re watching it for the first time it even has some secrets to be discovered in it. 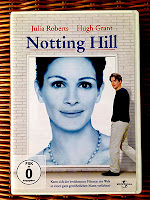 This is for sure my favourite romantic film of all time. It’s simple, but so cute and beautiful.

I’m quite sure it’s another one you all now. It’s about that simple guy from Notting Hill falling in love with a famous American actress.
I adore Will (played by Hugh Grant) and his crazy family and friends and Anna (Julia Roberts’ character) is so messed up and fun that you’ve got to like her.

I’ve watched Notting Hill so many times that I know most of the conversations by heart, if the DVD would break one day I could act it out on my own… If you haven’t watched it yet, you really have to. Seriously. It’s a must-watch.

So here they are – my top 5 romantic films for cosy autumn evenings. What do you think? 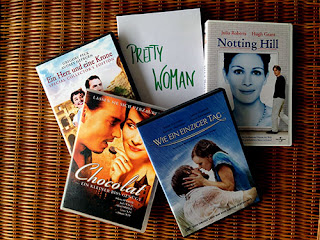 You can probably tell I like Julia Roberts by this list, I just realised that. The weird cover of Pretty Woman is due to me loosing stuff – I’ve got no idea where the original box is…

What would your Top 5 be? Let me know in the comment section. And get watching 🙂