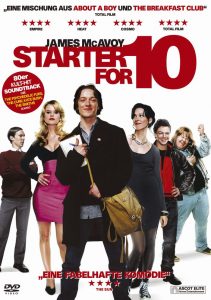 Here’s to me getting easily obsessed with people, especially with actors who I really like. When I see one who’s acting is brilliant I want to watch every film they’re in.
That’s why I watched “Starter for 10”, because of James McAvoy and Benedict Cumberbatch.

It’s been fun but not brilliant at least not very deep. But you can have a nice evening watching it.

The film is about a boy, Brian (James McAvoy), who gets into college and has to say goodbye to his old friends and settle in in the new environment. To get together with some people and because he’s been a fan of University Challenge since he was a little boy, Brian joines the quiz team of the university, which takes part in the challenge.

He falls for the pretty Alice (Alice Eve), who is also on the team, but he also likes to spend time with Rebecca (Rebecca Hall), with whom he has more in common, but she’s a little Geek and on the first look not as pretty as Alice.
Not only is Brian torn between these two women, but he’s also caught between his new life at a posh college and his old working-class life at home.

The set up shows the struggles of the life of a student, not the academic ones, but the ones concerning the private life. And it’s very relatable, when you are or have been to university.

This relatability and the funny and also the sad scenes troughout the film make it a good watch, even though you’ll know very early in the film, how it will end.