“Zwischen den Jahren” – The 5 must-sees for your holidays 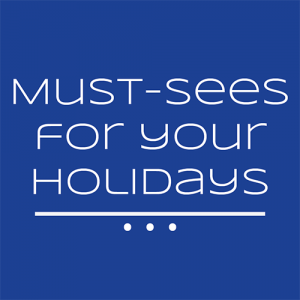 Hello there. I hope you all had a wonderful Christmas with your family and friends. I surprisingly did.

I know, I know. I already said my goodbye for this year, but I couldn’t resist writing another post – a post full of things to fill your days until the new year begins.

In German there’s even a saying for these days between Christmas and New Year: “Zwischen den Jahren” (literally translated to “between the years”). This goes back to ancient Egypt and the “invention” of the modern calendar. They had twelve months with 30 days, but already a year of 365 days. So they put the remaining days at the end of their last month and therefore it are the days between the years.

Anyway, enough about that. Maybe you’re one of the lucky people who haven’t got to work until next year and hence have a lot of time to spend with family or friends going out or staying in. And in that case you might search for something to watch and here’s where I come in.

I’ve picked five things you could or even should watch during these short winter days (if it’s winter where you are, it’s still too warm for December over here).

1. Star Wars: Ep. VII – The Force Awakens
I’ve been to IMAX to see it on Boxing Day and it was amazing. I really loved the new film. The new and old characters fit together perfectly and the story is living up to the old Star Wars films (especially the “really old” ones). Go and see it, if you liked the previous ones, it won’t let you down.

And maybe take advantage of it and rewatch Episode I to VI as well.

2. Doctor Who – The Husbands of River Song
As you know I am a huge Doctor Who fan and therefore I was of course watching the Special episode on Christmas Day. And it was a glorious one. I’m one of the lovers of the character of River Song and I was really happy when I heard that she’s going to be back for Christmas.

It’s her first appearance together with the twelvth Doctor and let me tell you: Those two have an awesome chemistry. The Husbands of River Song is a witty, chaotic (in a good way), rapid and also emotional story and it’s a must-see.

If you haven’t seen the past two series with Peter Capaldi yet, that’s not a problem, you can still watch it. In fact, maybe it’s a great episode to get into him, because he’s brilliant in it. But you should be familiar with River Song’s story, otherwise it doesn’t make sense.

3. Marvel’s Jessica Jones
Speaking of Doctor Who, that leads me to this one. Why? Because David Tennant, the tenth Doctor, is in it. But that’s not the only reason why I absolutely recommend watching this series, if you’re a NETFLIX user.

It’s another one of Marvel’s and NETFLIX’s original series. This time it’s about former superhero turned private investigator Jessica Jones. Watch the trailer and you’ll know everything you need to know.

The series is truly thrilling, captivating and sometimes quite scary. The actors are amazing, espcially of course David Tennant. I’ve never seen him do something that’s not excellent – his Hamlet, his Doctor, his DI Alec Hardy and now his Killgrave. And Krysten Ritter is doing great as well.

Be careful not to watch all episodes at once, but watch it, if you haven’t yet.

4. London Spy
I discovered this five part thriller kind of accidentally, when searching through BBC iPlayer for something to watch. And I’m so glad I did.

It’s a mini-series about intelligence agencies, love, murder and life. I really don’t want to tell anything, because I don’t want to spoil it. But if you like thrilling and disturbing storytelling, then London Spy is something for you.

5. Sherlock: The Abominable Bride
And this should be one of the first things you’ll watch in 2016. I of course haven’t seen it yet, but I’m quite sure it’ll be brilliant. How could a Sherlock episode not be brilliant?

I’m so excited about what this Victorian times special episode will be like. If you’re not familiar with the BBC’s Sherlock starring Benedict Cumberbatch and Martin Freeman, then you must watch it. There’s already three series of it, but as it’s only three episodes per series, you can make it through them until New Year’s Day to watch The Abominable Bride.

It airs on January 1st on BBC One and in selected cinemas. Watch/Like my Facebook page, if you want to be informed about Amazon releases etc.

Well then, that’s it. I hope you liked my “surprise” post and maybe found some inspiration on what to watch in the next days. I’d love to hear from you what you think of the series, specials and of course the Star Wars film. Let me know your opinions in the comment section below.

Have a wonderful time, enjoy your days off, if you have some and have a happy New Year. You’ll hear from me in 2016. On January 4th to be precise with the first weekly playlist of 2016.

Songs of the Week [Christmas Special]