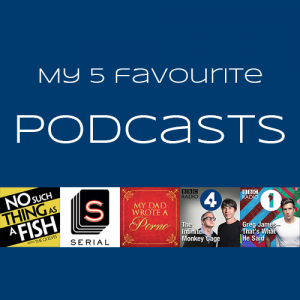 Some of you might know that I’m an avid podcast listener and actually somehow kind of working on one. The others know it now.

I am one of these people who get quite bored doing stuff around the house like washing the dishes or doing the hoovering. That’s why I need a second thing to do.

Listening to podcasts is a great alternative to listening to music or the radio. Don’t get me wrong I love my music, you know that. I’ve got music playing in the background whilst working, reading and other stuff. Sometimes you need something else…

The one’s I want to introduce to you today are a bit of everything. I didn’t want to rank them, as they’re all so different and can’t really be compared. So in (nearly) no particular order, here are five of the podcasts I really enjoy listening to: 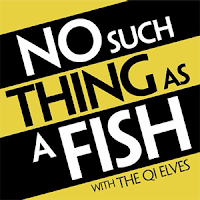 In this podcast the researchers of the BBC TV show QI – also called the QI Elves – present the most interesting facts they’ve stumbled upon during the past week.

If you don’t know the show QI, here’s what it is about (if you know it, skip to the next paragraph):
QI (short for Quite Interesting) is a comedy panel quiz show, where the guests have to answer obscure questions and get points for being interesting. Each series focuses on a different letter of the alphabet (the current one is M), every episode has a theme and the questions are based on facts within that theme and are supposed to be quite interesting, hence the name. The motto of the show is: “We believe that everything should be interesting.”

The podcast features facts that haven’t made it into the TV show, but were found quite interesting by the QI Elves James Harkin, Andrew Hunter Murray, Anna Ptaszynski and Dan Schreiber. Every one of them presents they’re favourite fact of the week, which is then discussed with lots of additional information surrounding the fact or other facts related to the initial one. I think it’s a bit hard to explain, you’ve got to listen to really get it.

I like the podcast, because it’s never boring, simple facts. It’s always something funny, impressive or unbelievable. It’s the facts that aren’t important, but will be remembered by you for a while because they’re special. 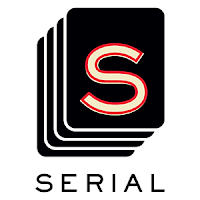 Serial is something very, very different. It’s serious. Not funny at all, but gripping, suspenseful and in a way disturbing.

The first season of this nonfiction podcast focused on the murder of Hae Min Lee and tells a story of love, death, justice and truth.

Producer Sarah Koenig investigates the case of Hae Min Lee’s homicide and Adnan Syed, who was found guilty of the murder, even though he said he was innocent.

Sarah Koenig starts investigating after she heard of Adnan’s case. She’s going through lots of legal documents, recordings of the trial and has also been talking to the people involved, trying to find out what really happened. She realises that there has been a lot of things, that weren’t discussed on the trial and that there’s a lot more to the story than what was formerly known. The podcast follows the plot and the characters wherever the investigations leeds her. There’s also lots of additional material on the website, which makes it possible for you to get even more involved.

Serial is a very well done piece of investigative journalism. It is a true story and that’s what makes it so upsetting, but also thrilling to listen to.

A second season about another case is planned and will hopefuly be online soon.

The special thing about that: The book was written by Jamie’s dad! Imagine your dad would have written a dirty book. I know. I would have kept quiet about that, but Jamie decided to read it out to the world and let his friends comment on it. And Alice’s and James’ comments are hilarious. In fact, the book is. 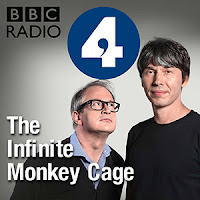 This is the educational one. But not in a boring kind of way and it’s also not a lecture.

The podcast is the extended version of BBC Radio 4’s show The Infinite Monkey cage. It is hosted by physicist Brian Cox and comedian Robin Ince and can be described as factual comedy.

For every show a popular scientific topic is picked and then discussed by the presenters and their guests. Most of the time the guests are two scientists working in the field that is discussed and a comedian.

I love this way of looking at science. It doesn’t have to be boring and hard to understand – not that I think it is boring – but I know that lots of people think that. And I’m a huge fan of shows that try to change the view on science and attempt to impart knowledge in a fun way.

And that is exactly what this podcast does. You learn a lot about what’s going on in science at the moment, but there’s also always a fun side to it. Scientific knowledge and Comedy – a perfect combination. 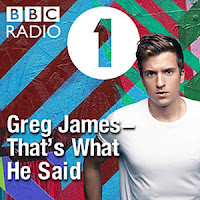 I’ve saved the best for last. Or let’s say the one I’m never missing an episode and never getting tired of.

The That’s What He Said podcast contains the best bits from Greg James’ BBC Radio 1 drivetime show and lots of additional podcast-only fun.

It is hosted Greg James and his BBC Newsbeat friend Chris Smith or better known as Chris Smith With The News.

They guide the listeners through the best things that happened on the actual radio show, such as interviews with studio guests, quizzes like the Mayor of Where (that’s where Greg and Chris have a mayor on the phone and try to work out what town he is the mayor of) and Wrong Uns (a quiz where a listener has to give as many wrong answers as possible) or other features like Rage Against The Answer Machine (where the best angry messages left by listeners are played).

As I’ve already mentioned, there’s also some podcast-only stuff, you wouldn’t want to miss out on. During the past two years of the podcast, lots of characters have emerged, that appear for some extra fun. To mention at least some of them there’s the Buttermonster, who lives in the Podcast fridge, the CERN receptionists, who try to talk about what’s happening at CERN, but seem to be struggling with that, and lots of tiny celebrities, who always have something to comment on.

Additionally, there’s an interactive section in which the emails of listeners are read out, Aubergine Corner is visited (yes, lots of people are sending pictures of aubergines in, we’re a crazy family) and the birthday song is performed. This is also the part where I come in, if you want to know more about that, read the beginning of this post from earlier this year.

And that’s not even all that happens, if you want to know more go to the Wikipedia page or simply listen to it. You will love it, I’m sure. Except you hate having fun, then you won’t.

Well, that’s it from me then. I hope you’ve found some inspiration for your next podcast listening session. Let me know if you like the suggestions or if you’re listening to some of them already. Can’t wait to hear from you.