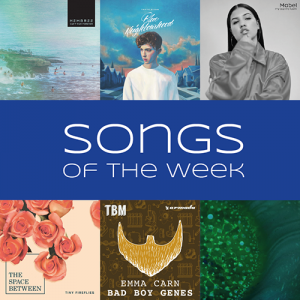 HAPPY NEW YEAR! I hope you all had a great start into 2016. I actually did. I was visiting a good friend in Zurich and we had a joyful time wandering around the city, eating too much cheese and watching the NYE fireworks at the lake.

I’m excited to start the fresh playlist for this year – Welcome to the Songs of 2016. Follow this playlist and you’ll be able to watch it grow throughout the year.

I was slightly excited for this week’s Songs of the Week. I hoped to find a lot of new songs for you, but most of them are from last year. I’m so outdated. But seriously folks, I’ve found some songs that are really great and by artists of whom I hope that they’ll be doing great in 2016. Except for Radiohead of course, they’re big already.

Hembree sound a bit like a male HAIM and the single Can’t Run Forever is catchy and groovy. It’s very detailed and has got lots of different elements in it, but it’ll still be stuck in your head and you’ll be singing along after half of the song.

Also the title is a good new year’s message: You can’t run forever, face the things that come up and make the best out of it.

This is the latest single from Troye Sivan’s debut album Blue Neighbourhood and I really like it. In fact the whole album is quite amazing.

YOUTH contains some elements that remind me of Troye’s first single WILD, but it’s also got some fresh elements and a great rhythm. A really lovely song.

My Boy My Town – Mabel

Mabel is one of the artists who made BBC Music Sound of 2016 longlist and I really love her relaxed sound. Mabel’s got this aerial tone in her voice which gives her songs a special touch.

My Boy My Town is a songs that’s simply beautiful because of the smooth vocals and the catchy pop refrain.

This one’s the song for fans of dreamy electronic pop music. American new wave duo Tiny Fireflies have released their new album The Space Between a bit more than a month ago and this is one of the songs on there. Probably my favourite. It’s a good example of what their sound is like and if you like this song you might want to listen to the whole album.

Bad Boy Genes is the first single by Australian singer-songwriter Emma Carn. It’s a good one: catchy, laid-back and lyric-wise a bit angry – a great combination. I’m curious about what the future brings for her. I’ll be watching/listening.

And here’s unexpected new and free downloadable music from Radiohead. How exciting! Apparently they were asked to write a theme tune for the Bond film, but it didn’t make it in the end. Luckily we still get to hear this tune as the band released it as a free download for Christmas.

The song is dark and opulent and would have been a great Bond theme to be fair. I might even prefer it to Sam Smith’s Writing’s on the Wall. I can’t stop listening and it’s about to become one of my favourite Radiohead songs ever.

It’s not on Spotify, therefore it’s not on the playlist over there. But I’ve added one of my and probably everyone’s favourite Radiohead song – Creep – to it as a substitute.

As always, there’s the full playlist for you available on Spotify. Listen again and again and let me know, what you think of the songs.

If you have any great song, that you think should be added to one of the next Songs of the Week lists, please let me know in the comments, via Twitter or email.

“Zwischen den Jahren” – The 5 must-sees for your holidays