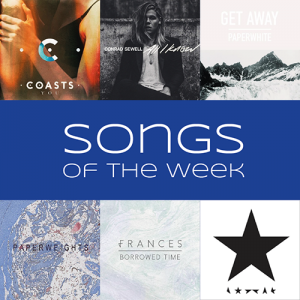 Are you excited? It’s new music time again, like every Monday. I hope you had a good week back in normal holiday-free life last week.

This playlist turned into something more emotional this morning. I had picked the songs already over the weekend and written most of it down.

And this morning I woke up to the news that David Bowie has died after fighting cancer for the past 18 month. I was confused and a bit in shock. It was weird to hear that after I was listening to his new album only yesterday and had a Bowie-day as I chose to listen to loads of his old songs as well afterwards.

Anyway. I hope you enjoy the new playlist with the new, a bit more emotional ending due to today’s news. Here we go.

YOU is the newest single of British rock band COASTS. I really liked their singles Oceans and A Rush Of Blood and I’m excited about hearing even more from them.
The new single continues with the gripping riffs and the catchy melodies, that also the former songs had. It’s great.

If all the other songs on their upcoming debut album will be as good as YOU, it will be amazing! The album will be released on 22nd January, so look out for it.

You might know his voice already from KYGO’s Firestone, which is a great song. And now Australian singer-songwriter Conrad Sewell has released some songs on his own and my favourite is by miles this one.

The sound of Shadow reminds me a bit of early Justin Timberlake’s songs, but just a bit. It’s a good pop song, that makes you tap your toes and bob on your chairs.

The chorus is so catchy, that when I discovered this song on soundcloud I couldn’t stop humming it for about an hour or so… The lyrics are great and I do enjoy their musical style, somehow simple and also fetching.

Paperwhite are an American synth-pop duo, who released their first EP in 2014 and I hope there will be more in future.

And to confuse you a bit, here’s a song that’s called nearly like the band of the song before. It even confused me while preparing this post.

I’ve seen Roo Panes at a festival in my hometown last year and it was beautiful. The British singer-songwriter has a voice that causes goosebumps and his songs are stunning. Sometimes I need something to get calm and also a bit emotional and Roo’s new single Paperweights is just the right song for this.

This was another soundcloud discovery, then I realised I even heard it on the radio before.

Borrowed Time is much fun to listen to. You can hear, that it’s co-written with Howard Lawrence of Disclosure. It sounds a bit different to her former works, but her voice and her charme is still the same. And with the little Disclosure touch Borrowed Time is a glossy pop song, that hopefully helps to get Frances more known.

And last, but certainly not least: One of the songs of legend David Bowie’s new album. The album was released on Friday and I had a listen over the weekend. I think Lazarus is one of my favourite songs. It somehow shows why David Bowie is such an inspiration to other artists and also a musical legend.

As I already said, I had picked the songs yesterday already. But today this song and the decision to put one of Bowie’s last songs onto this playlist has gotten a different meaning. RIP David Bowie you’ve been amazing and the music world will miss you!

Like always there’s the whole playlist for you to save on Spotify and don’t forget to follow my Songs of 2016 playlist as well.