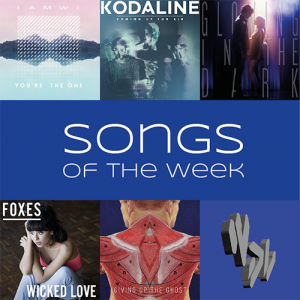 As always I have added six new songs to my Songs of 2016 playlist. I hope you will enjoy them.

It’s five brand new releases and one new single from an “old” album of a band I’ll be seing live at the end of this month. I’m already really excited for that first gig I’m going to this year.

This is my hymn for a cheerful start into the week. You’re The One is the first single taken from the EP LOVE and LOSS. It’s the debut EP of reformed American pop band IAMWE.
The sound of the single is catchy, happy and it has that special vibe a pop tune needs to make you feel great.

Coming Alive is the next single Kodaline will be releasing from their brilliant album Coming Up For Air as they announced on Facebook this morning. For me it’s the perfect song to start into February as I’ll be seeing them in 25 days time. And I can’t wait. They’ve been brilliant the last two times I’ve been there to witness their live performances and I’m somehow sure it will be even better this time.

The song itself is a great pop rock song with great lyrics and listening to it gets you motivated for whatever you’re doing whilst listening.

Glowing in the Dark – The Girl and the Dreamcatcher

Glowing in the Dark reminds me a little of these typical 90’s power ballads and I love that. It’s another good-humoured pop song which makes you dance and whose chorus will be stuck in your head for a while.

It’s the second single by the duo The Girl and the Dreamcatcher after Written In The Stars and it makes one excited what’s going to come next for the two singers.

This new song by Foxes is just so cute I had to put it on the list. It’s the first single taken from her upcoming album All I Need. It might not be lyrically sophisticated, but it’s funny and catchy. Just a happy song that you shouldn’t miss out on.

Giving Up The Ghost – Alex Vargas

Alex Vargas is a Danish singer-songwriter who has just released a new EP called Giving Up The Ghost. And the song above is the title track of this EP which is sounding great. It’s a proper soul track whose beat is amazing and is giving you a good impression of how the whole EP is like, even though each song has got his own special touch.

The last track is Swedish producer WDL’s new single featuring singer-songwriter Mawe and is called Hurricane Highlife. It doesn’t sound like a disruptive hurricane. Instead it’s sounding smooth and has got this outstanding string sounds that make you want to crank up the volume to the maximum. Mawe’s casual vocals round it up to a great track that makes you look forward to WDL’s upcoming album No Wings Airline.

I hope you enjoy this weeks songs! Please let me know what you think, I love hearing from you.

Follow me on Spotify for musical updates and don’t forget to check out the full Songs of 2016 playlist.

This Is Acting // Sia