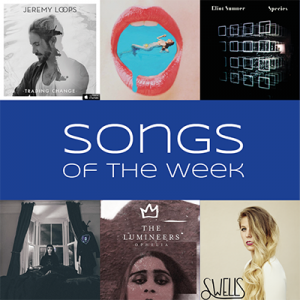 And for the others: It’s carnival over here, the time when some Germans get a little more weird. There’s lots of parties, everyone dresses up with funny costumes and there’s parades with confetti, candy and chocolate. It’s the best thing. For some. Others hate it…

Anyway it’s time for six new songs to be added to my Songs of 2016 playlist, don’t forget to give it a follow on Spotify.

I hope you will enjoy this week’s songs – here they are:

Jeremy Loops was recommended to me by a good friend. I’ve listened to some of his songs, I really enjoyed it and therefore I decided to add his latest single to my playlist.
It’s called Higher Stakes, got really nice vibe, I like the guitars on it and Jeremy’s slightly rough voice gives it a special touch. Give it a go!

I love this song! It reminds me of something, but I can’t tell you what because I can’t remember what it is. This unnecessary information aside, Swim by EPISODE is a fresh alternative rock song. The chorus is so catchy – I caught myself humming it in the shower earlier. I can’t wait to hear this song on the radio, it’s one of those which make your day a lot better.

Remember Sting? This is his daughter and I’m really hooked by her voice. In comparison to the other songs this week it’s less rocking and more electronic. Also, the song is a bit older (it was released last summer), but I just discovered her and her album Information came out in January thence I think it’s alright.

This one is the most rocking track for this week. Creeper are a punk rock band from Southampton and Black Mass is the first single off their upcoming EP The Stranger. I’m normally not the “punk rock type” because most of the time it’s a bit too much for me, but this one is good. The song is very energetic and has character, I really like that.

Remember Ho Hey? Here’s another earworm by The Lumineers. Yep, two weeks after I’ve asked myself what happened to them they’re realeasing a new single – good timing.
Ophelia is the first single taken of their brand new album Cleopatra which will be out in April. I know a lot of female names there and with Angela there will be one more on the album. Anyway, the first single sounds great. It’s a catchy, happy and funky pop song.

Swells is a singer-songerwriter from Oklahoma, who is releasing her debut single White Noise on February 19th and you can listen to it already on Spotify.
She says her music is inspired by The Supremes and Ella Eyre. As you might know I really, really like Ella Eyre (see my review of her debut album Feline) so maybe this is the reason why I really enjoy listening to White Noise. Or it’s Swells beautiful deep voice and the catchy R&B tunes. Either way I hope you enjoy it as well.

So that’s this weeks songs. Do you like them? What is your favourite new song out there lately? As always I’m looking forward to hearing from you.

If you’re wondering why neither Rihanna’s nor Beyoncé’s new tracks have made the playlist, I might have an unpopular opinion here, but I’m not really excited about them. Rihanna’s Work is a bit strange and whilst I love the message (and lyrics) of Formation by Beyoncé I don’t like the musical arrangement.

Speaking of Beyoncé, have you watched the Super Bowl half time show yet? After performing a colourful medley of their hits Coldplay were joined by Beyoncé and Bruno Mars for an amazing performance looking back on past half time shows as well. The show ended with the beautiful message: Believe in Love.

Now that’s nearly it for this week. I’ve only got one last question: Does it make sense to you, that I make an extra playlist every week (here’s this week’s) or should I only add them to the big Songs of 2016 playlist? Let me know.

This Is Acting // Sia