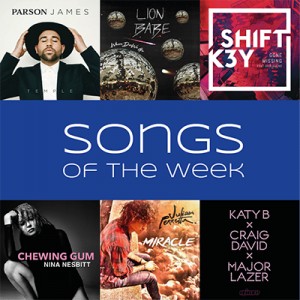 Hi everyone! It’s Music Monday and time for six new and exciting tracks.

It’s been my birthday last week and I had a little party and hence I was on the search for some new cheery songs for my party playlist. My guests seemed to enjoy the songs and so I thought you might like them as well.

That is why today’s additions to the Songs of 2016 playlist are picked from my party music collection. They’ve all been released recently and are good fun. I hope you like them.

Ooooh oooh oooh – here we go. Parson James calls his music “Conflicted Pop Gospel”, I call it cheerful and catchy. Temple is an upbeat happy pop song, perfect get your fingers clicking.
Parson James is currently working on his debut album and Temple is his second single following Stole The Show which was a collaboration with Kygo.

Where Do We Go – Lion Babe

Lion Babe is a neo soul duo from New York, they’ve released their first album end of January and Where Do We Go is their newest single release. The song is groovy and combining disco with pop. Therefore it’s the perfect song for a great night.

This song is a bit older than the others. Gone Missing has been released at the end of last year, but there’s still new remixes coming up every now and then and it gets a lot of airplay lately. I reckon that is why it instantly came to my mind when I was picking the songs.
The track has a driving beat, the vocals are great and I love the synths on it as well.

Nina Nesbitt has gone from indie singer-songwriter to pop diva and her newest single Chewing Gum from the freshly released EP Modern Love proves that. It sounds a bit like a mixture of Demi Lovato and Foxes, I really like it.

He’s been touring with Amy Winehouse and Beyoncé and now English singer songwriter Julian Perretta is back with a new single. Its called Miracle and it’s another catchy pop tune. It’s a collaboration with Belgian producer Lost Frequencies (you might remember his chart topper Are You With Me) and you can hear that.

Who Am I – Katy B, Craig David and Major Lazer

The last one for this week is a bit more laid back, but what a track! I really love the lyrics, the R&B vibes and Katy B’s and Craig David’s voices are working stunningly together. I’ve been listening on repeat for half an hour or more and I didn’t get bored, hence I reckon it’s a great song and you should give it a go. It gets even better with time.
Who Am I is the second single taken from Katy B’s upcoming album Honey which will be released n April 29th and will feature lots of other exciting collaborations.

Did you enjoy this week’s selection? Which song is your favourite? Let me know.