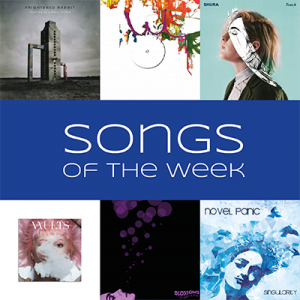 Hello there – I hope you have been looking forward to Music Monday as much as me. I’ve been going through this week’s new releases over the weekend and there’s been some really good ones.

I have also picked some songs that aren’t particularly brand new for today’s list, but they’re great and should be heard.

If you don’t enjoy the beginning (of what I hope isn’t the case, but you never know) make sure to read/listen on because Midnight River is totally worth a listen, believe me.

Of course all the songs have been added to my Songs of 2016 playlist on Spotify – make sure to follow it to enjoy the full beauty of 2016’s music.

But back to this week’s new additions. Here’s this week’s playlist – press play and continue reading (yes, I’ve changed the layout a little).

Frightened Rabbit is an indie rock band from Glasgow which has been making music for over ten years now.
Death Dream is the lead single of Frightened Rabbit’s newest LP Painting Of A Panic Attack. It’s got a depressive but beautiful sound. I love how the song is drifting and slowly building up.

On My One – Jake Bugg

Remember this voice? It’s one of these unique voices you will recognise within the first few vocals – Jake Bugg.
He is back with a new single called On My One, which is taken from his upcoming third album and is downloadable for free on Jake Bugg’s website. The track is short, sweet and really beautiful. Sometimes I like stripped back songs like this with just a guitar, minimal percussion and a great voice.

Shura has finally released her single Touch last week and it’s totally my jam. Relaxed electro pop at it’s finest. I’m a lover of relaxed tracks paired with a beautiful voice.
Her debut album Nothing’s Real will be out somewhen this year and I will be looking out for it, I’m quite sure it’s going to be great.

This is the one song I already mentioned because you really shouldn’t miss it. London trio Vaults have released this beauty of a song on Friday and it had me within the first few seconds and the chorus made me put it on repeat. It is catchy, gorgeously arranged and brilliantly sung by blythe Pepino. To say it in the song’s own words:
“It feels like you’re losing control, let go!”

At Most A Kiss – Blossoms

This January release has been on my “Currently Listening” list for a few weeks now and it’s really grown on me. Therefore I didn’t want to keep it from you.
At Most A Kiss is the latest single by British indie pop rock band Blossoms. Melodic, catchy and glamorous – that’s how I would describe their sound and I’m really looking forward to hearing more of them soon.

This song has already been released last year, but I’ve discovered the band only two days ago when one of their songs was played on the radio.
Novel Panic are a progressive alternative rock band from Bamberg in Germany. They have released there debut album Singularity last September and On Fire is my favourite track from it.

Did you enjoy the songs? And as importantly: Is the new post layout (full playlist and song descriptions below) better than the old one (player for each song seperately)? I really need your help on this one because I can’t decide. And it’s more important you like it than what I think, so please let me know (in the comments below, on Twitter or via email).