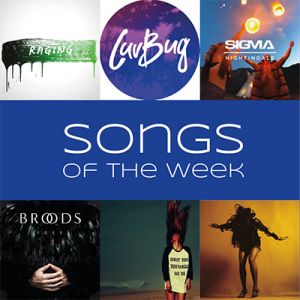 Hello again. To say it in the words of Sherlock’s Moriarty: Did you miss me?

It’s another Monday and it’s time for yet another playlist. This week featuring the song that’s been playing everyday at my home since it got released and the title track of a great new album which luckily didn’t turn out to be an April’s fool.

By the way, do you have any great April’s fools stories? I’d love to hear them, so leave a comment.

Back to the music, that’s what we’re here for, isn’t it?

The first song of this week’s songs is basically my favourite song at the moment. Raging by Kygo featuring Kodaline was released last Friday and I reckon I listened to it at least 30 times so far – sometimes one has to use that repeat button.
I remember telling you two weeks ago that “I am looking forward to hearing even more great tracks” by Kygo and now he’s surprisingly released a song with my (second) favourite band – perfect!

Even though I thought of it, I couldn’t make a playlist with only one song, hence I searched for five other great new songs for you.

Dance music trio LuvBug’s latest is called Best Is Yet To Come and it’s a catchy track, that sounds a bit retro and makes you look forward to the garden and beach parties this summer.

Drum and bass duo Sigma have also released a new song in the past weeks and it’s called Nightingale. I particulary like the piano on it and the calm vocals.

Free is the newest song by indie electro pop duo BROODS from New Zealand. It sounds a bit darker than their last releases back in 2014 and a little more grown up and edgier.

Sunset Sons are the indie rock band who supported Imagine Dragons on their Smoke + Mirrors Tour 2015. Oh and a little fun fact for Doctor Who Fans: The lead singer of the band is called Rory Williams.
They have released their debut album Very Rarely Say Die last Friday and Tick Tock is the latest single taken from it. It’s a high energy song, it’s a good representantive of the whole record and I remember it sounding great live as well.

The last song is the title track of the new album Everything You’ve Come To Expect from the brilliant Last Shadow Puppets. If you are into psych/indie rock you should definitely have a listen to the full EP because it is quite brilliant.

So this are this week’s songs. Which one’s your favourite? Let me know in the comments, I love hearing from you.