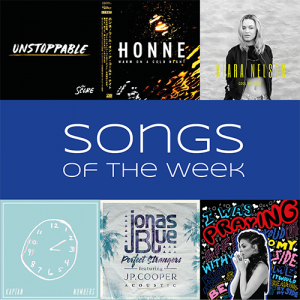 Songs of the Week 29

…but I will never run out of music!

I have been going through all new and some recent releases over the weekend and on the list today are the six tracks I enjoyed most.

I added them all to my Songs of 2016 playlist (Spotify // Apple Music) which is getting really long now we’re already halfway through the year – and these are the new additions of the week:

The first track is called Unstoppable and is the brand new one by indie pop act The Score. They have created an infectious and powerful pop anthem, that predicts exciting times when more music of them will be coming our way. You should check them out, especially if you enjoy the pop tracks by Fall Out Boy or Imagine Dragons.

If you followed my music posts throughout the year then you might remember HONNE and the track they did with Izzy Bizu called Someone That Loves You. I really liked that and it’s just the same with their newest single Good Together. It’s a calm, chilled out but also sweeping song. Their album Warm On A Cold Night will be out this Friday and I am certainly looking forward to listening to it on the weekend.

Cool My Rush is the dancey debut single of Kiara Nelson, a Finnish-Swedish-American singer from Helsinki. It’s fun and catchy and a great song for the summer. She is currently working on new music that will be released later this year

Numbers is next on the list and it is by Nashville singer-songwriter Andrew de Torres better known as Kaptan. The song is emotional and just beautiful without being to sad, I really enjoy that.

The next one is not a new song – it’s a new version of a song I already enjoyed but not quite enough to put it on the list before. But with the acoustic version Jonas Blue and JP Cooper have turned Perfect Strangers into a song that’s totally worth being featured on my Songs of the Week. It’s great for your summer playlist, so add it!

And I want to end this week on a pop high – BB Diamond’s Praying. It’s a bit 90’s girl band with the background choir and everything, but in this case this isn’t a bad thing. It is an enjoyable, happy, upbeat track that will make you happy.

I hope you enjoyed all the brand new Songs of the Week and if you do or if you don’t why not let me know? What was your favourite new song that came out last Friday? Just leave a comment below, I love hearing from you.