The blog has had a little makeover and I feel like it’s the right time to write a special post about something that happened two weeks ago and was somehow a little journey through German music in a special way. So here we go, I hope enjoy this a bit more personal and quite different post.

It was so hard. Not as in really difficult but as in I couldn’t make up my mind. When I first heard I should pick a song I thought “Great!”. Two minutes later I thought it’s impossible.

Firstly I think I’ve got to explain, what this is about as most of you won’t know. So here’s a bit about a small part of my life, which is a bit weird, but definitely fun.

I’m German but I like a lot of British music and films and maybe because of that I’m a fan of the BBC and what they’re doing. It started with their TV Shows and then I started listening to BBC Radio 1 as well. And I loved it.
Then, at the beginning of last year, I have been in hospital and was very bored, so I started listening to Radio 1 Podcasts. The one that stood out for me was Greg James – That’s What He Said. And that’s when Julia from Germany started. 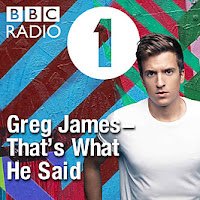 Some time later I emailed to said Podcast – well Chris Smith (With The News), who’s in charge of the emails – just to say that the Podcast is funny and I like it and that I loved the few German words Chris had said on it. And they read it out. I emailed back again, not every week, but occasionally when I had something to comment.
But then, one day (the 26th September 2014) Greg and Chris decided that they need to have a show clerk, cause they kept forgetting stuff. And Greg suggested me fo the job. How could I say no to that? That is why I’m emailing them every week now with an agenda for the Podcast and other sometimes completely irrelevant stuff that comes to my mind.
To the Podcast listeners I’m THE Julia from Germany now. First they learned how to pronounce my name like it is in German and then they got to know me a bit better that one time I co-hosted the Podcast when I was over in the UK.

Well, I think that’s the rough history of Julia from Germany. If you want to know more about the Podcast you can check out the Wikipedia page or simply listen to it. Or better said: Listen to it, you’re missing out on a lot of fun if you don’t!

Now on to the theme tune which is why I’m actually writing this post: Last week Greg decided that it’s time for me to get my own theme tune and that I should send them some music so they could come up with a song about me. I was honoured. And happy. And scared.

I wanted it to be good. Therefore I couldn’t just pick any song I really like, because that wouldn’t really make sense and also not every song is suitable for a theme tune…

That’s why I wanted it to have something to do with Germany. But it shouldn’t be Schlager music, which might be typical for Germany but really isn’t good. I can only bear it at carnival or a funfair or something like that.
At that point I wanted to have German music that also has something to do with the UK as well. It will become apparent that these expectations were a bit too high.

But I was eager to find something. Therefore I looked up all songs that were number one hits in the UK and were by German musicians. I learned a lot about British music history starting from the 1950’s I guess and a bit about German music as well. Not a lot of songs were successful beyond the borders of Germany… Here’s the UK number ones with German origin I found:
Kraftwerk were the first Germans to score a number one in Britain. Their songs “Computer Love” and “The Model” were on top of the UK charts in February 1982. Both songs were on one single that’s why there’s two of them.

The winner of the Eurovision Song Contest 1982 Nicole was the second one. The English version of her song “A Little Peace” made it to the pole position of the charts after the win for Germany in May 1982.

Next there was Nena of course. That’s the only one I knew about. She recorded an English version of “99 Luftballons”, a anti-war protest song, called “99 Red Balloons” which topped the charts not only in the UK, but also in Canada and Ireland. And a little fact on top: The German version became one of the most successful non-English songs in US music history.

On to the 90’s now. The German Eurodance band Snap! were the one’s to score a UK number one twice and have been on top of the charts for 8 weeks. Firstly with “The Power” in 1990 and then secondly with “Rhythm is a Dancer” in 1992. That second one is a good one, isn’t it?

Eurodance seems to be the thing German’s did best these days, which might be why “Mr. Vain” by Culture Beat was a UK number one as well in 1993. The good old 90’s.

In the 2000’s the number ones were Fragma’s “Toca’s Miracle”, which to be honest is a quite boring trance track, Tomcraft’s “Loneliness” that’s another trance song and Cascada’s “Evacuate the Dancefloor” which is some kind of Electropop and quite catchy.

In this decade the remix of Lilly Wood and the Prick’s “Prayer in C” by Robin Schulz is the only one to appear on top of the British charts so far.

So that was a brief history of German music in the UK. I can see a pattern there, can you as well? Anyway, back to my theme tune problem. Even though there are several songs, none on that list is really suitable for a theme tune… Or maybe one. 99 Red Balloons might be a possibility, but not a great one.

“Maybe I should pick an all German song?”, I thought. But most of those I like, aren’t theme tune material, they’re just “normal” pop songs, nothing special.

That’s when I got to the point where I admitted I had to go for theme tunes that are made for being just instrumentals. Therefore I started listening to loads of songs by Hans Zimmer because he does beautiful soundtracks and is German – target group musician.
Pirates of the Caribbean. Too hackneyed and overused. Inception. Amazing soundtrack, but I’m not sure if it works. Interstellar. Beautiful, but also not theme tune material. Sherlock Holmes. Uhh the song that’s played when the credits are on has a good theme. But I still wasn’t satisfied.

Next thought: Well, I don’t care anymore, just take the Doctor Who theme. I love Doctor Who. And it’s great music. And the British love Doctor Who. But it’s got nothing to do with Germany and it should, shouldn’t it?
And on I went: What do/did I also like? Lois and Clark. Greaaaat theme! But also not German. Why is nothing German? Help me! I was distressed.

But then I had the idea. What did I like as a child? Löwenzahn. Siebenstein. Sendung mit der Maus. Germans will know what I’m talking about. And the others should click the links to listen to the theme tunes. I watched these shows as child and loved them. And they’ve got cute and simple theme tunes. The only thing that still kept me thinking was that I thought I need something more grown up, which was why I also thought of the Tatort theme. Tatort is a popular German crime series and it’s got a nice opening theme.

I was now sure that a theme tune is definitely better than some song and that it indeed should be German, otherwise it would be boring. Still between those I mentioned I really couldn’t decide. Therefore I’ve sent three suggestions (Sendung mit der Maus, Löwenzahn and Tatort) to Chris and Greg and waited for the reaction. Eagerly.

The week was going so slow. But then the new Podcast was uploaded and there it was. The Julia from Germany theme tune.

I had forgotten about Peter Lustig saying Löwenzahn at the end of the track and haven’t thought about how strange the sound of the dandelion cracking up the street would sound. But I still love it a lot. No one has ever made a song for me before. Thank you Greg and Chris for being brilliant!

And thanks to you for reading, if you actually made it to the end. Leave me a comment what you would have picked as your theme tune music!