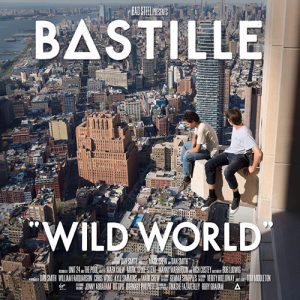 We are living in a wild world and this is exactly what Bastille reflect on their new album. The long awaited second album is called Wild World. It’s full of tracks that the band has written during the past three years on tour.

The album was written by the band’s lead singer Dan Smith and produced by Dan and the band’s dear friend Mark Crew.

I have to say this right away – I’m nearly sure that Wild World will be my number one album of 2016. Overall, it was definitely worth the wait. You can tell how much work was put into the songs – into the lyrics and into the music.

Lyrically, Wild World is very critical, a reflection of the quite complicated society we are living in at the moment. Further, there are more personal songs. Songs about love, loss and especially change. They are emotional and relatable. The whole album makes you think, especially because the lyrics are not too obvious, they are little riddles, hints and you have to piece everything together to see the picture on the whole puzzle.

What makes the whole of Wild World so special is that those lyrics are paired with amazing, catchy and very diverse music. You can hear that the band is influenced by so many genres – pop, rock, hip hop, R&B, a little bit of electo. It’s exciting to listen to the changing styles of music, that still fit together as a whole album. Sometimes the transitions from one song to the other are so smooth or covered up by a brilliant and very careful choice of film quotes, that you don’t even notice them. I would go so far to say that there is at least one song for everyone on this record. And in my case it’s every one of them.

I couldn’t possibly decide for a favourite song. Good Grief was the perfect first single choice (I already talked about it here). An Act Of Kindness and Warmth are great pop songs about the positive things in live. They are, well, about kindness and warmth and about the great feeling you have being around the right people.

“An act of kindness
Is what you showed to me
It caught me by surprise in this town of glass and ice
Kindness, so many people passed me by
But you warmed me to my core and you left me wanting more”

With Glory, the feeling changes a little already. It gets a little sadder and nostalgic. And Power reflects how it’s sometimes hard to be the nice guy sometimes and how powerful people tend to use nice people sometimes.

Two Evils slows the previously quite upbeat and full sound of Wild World down and shows of Dan Smith’s voice. It is about differences, choices and perspectives.

But before it gets boring, Send Them Off! sets in with brass, a quote from an Italian science fiction film and a catchy rhythm. The chorus is danceable and therefore it becomes one of the songs you just have to sing and dance along to.

Lethargy changes the tone a little but is still full of rhythm and a transition into Four Walls (The Ballad of Perry Smith), both lyrically and musically. I keep thinking it is a follow up to Icarus, a single from Bastille’s debut album Bad Blood, but it’s just a theory.

Then it’s time for a bit of rage. The band played Blame live for quite a while already, so I listened to it quite a lot before. Still, I can’t get enough of the properly produced album version. I love the slightly mysterious lyrics, the guitars and the rage. Blame is powerful, angry and very rocking.

This anger leads into the (lyrically) more frustrated and depressing songs Fake It and Snakes. I adore the combination of these bleak lyrics with captivating music, that itself isn’t deppressing at all.

I’m utterly in love with Winter Of Our Youth. If I had to pick a favourite, it would be a strong contenter. Maybe because I share the feelings of vanishing youth, Dan Smith tried to put into words in the songs. I just felt an instant connection to the lyrics and the music is simple and beauiful.

“I’m pedalling backwards
Even if I’m pedaling alone
Can’t help it
I relive it, I relive it all”

Whilst Winter Of Our Youth is the last song on the standard version, Way Beyond is the first of five extra tracks on the “Complete Edition”, which is definitely worth it. If only for the very stunning ballad Oil On Water, which might make you shed a tear if you are in a sad mood.

But you will be picked up by the ironic and heated Campus, a song that was also played during some of Bastille’s live gigs over the past year. The heated feeling wafts through Shame and the “Complete Edition” ends with The Anchor, which rounds off the album on a happy note.

For me, Wild World is the perfect follow up to Bad Blood and shows the great talent of Bastille. It reinforced my decision to answer questions about what my favourite band was with “Bastille”. There’s not one song, not one album I don’t want to listen to repeatedly. I will never get bored of them.

But enough with speaking words of praise. See or better listen for yourself and let me know what you think of the album. Go to http://www.bastillebastille.com/ to get links to all the listening/downloading/buying options.