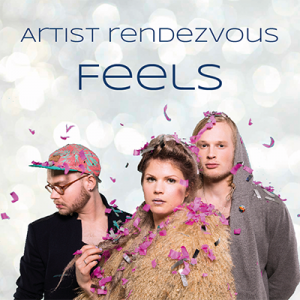 I haven’t done this in a while, but now it’s finally time to meet a new band. Press play below and read on.

FEELS is a Finnish electro-pop group formed of singer and songwriter Sofi Meronen, keyboardist Mikael Myrskog and producer Jooel Jons. They describe their music as gripping and toned with northern melancholy.
The band’s debut EP Butterflies will be out next week and therefore it’s the perfect time for you to start following their musical journey.

I think my favourite song is I Wished For Butterflies, but the other songs are really good as well. Smoke Signals is vibrating song with some great synth sounds and If You’d Meet Me Tonight (the one you’re listening to right now, if you pressed play above like I said) is a beautiful, melancholic ballad about love and pain – a theme that is running like a thread though the whole EP. You can tell that the lyrics are written about big feelings.

I do enjoy FEELS music as it’s a great mixture of elctronic synths and grasping melodies paired with very well-sung vocals and great lyrics.

That’s what I would say about FEELS, but who can describe a band better than an actual band member? No one.

Luckily, I’ve had the chance to ask singer Sofi some questions about the band itself, their inspirations and musica influences. Read what she said below.

Since when are you making music and how did the band start off?
Ah, it was 2012 and Jooel and Myky had been playing together and I think they had at least one gig by the name ‘The Feels’. Then I got a gig at this terrace where I was working at the time, and asked ‘The Feels’ to come and play with me. We arranged a few of my songs for the gig as well. That’s how it started!
We played a few gigs in Helsinki, but then we had a long break because of our travels and everything. We started working again in 2013, the name shortened to ‘FEELS’ and we started searching for our own, special sound.

You’re about to release your debut EP. How would you describe the sound of it?
I’d describe it as melancholic yet hopeful, like open, epic, shimmering landscapes.

What was your reaction when you first heard one of your songs on the radio?
Ha, it was when we were driving with Myky to our first gig in December 2013. I felt like a little kid at christmas! I think we had pretty wide smiles on our faces.

Where do you get the inspiration to write music from?
Sometimes I’m not that good at talking about things that feel difficult to me. By writing I get it out, piece by piece. So, big feelings.
Art inspires me as well. Earlier this year I was in NYC for a month and I went to the Björk-exhibition in MoMa. There was a black room with sofas inside and Björk music videos showing. It was really special and I went back there on another day, and watching the videos I got this melody in my head. Then I went back to my friends place and wrote the song with her 80’s casio synth.

What is your favourite song/album by another artist at the moment?
I saw Seinabo Sey live in Helsinki last year and it was a really touching and inspiring show for me. Then her album came out and it’s totally gorgeous. Her presence is something out of this world.

What’s your biggest dream regarding your band?
I think we have a really special thing with the guys and I hope that it stays that way and we’ll keep working together. And we are still in the beginning so I hope we’ll gain interest and that it’ll keep growing from here. Headlining Coachella in a few years…

I hope you like what you read and heard, if you haven’t listened yet, do it now! The EP Butterflies will be released on the 1st March. I’ll be reminding you again on Facebook, so make sure to like my page.

You can also download the song Next Time from the EP Butterflies for free already.