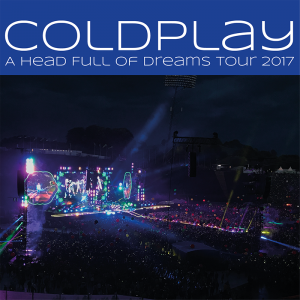 It’s the 6th June and it has been a grey day so far, lots of rain, no sunshine and all of Munich was looking slightly grey – but this is going to change soon. My friend and I are on our way to the Olympia Stadium to see Coldplay. When we finally sat in our seats watching the support acts (Femme Schmidt and AlunaGeorge) after running around to get some drinks and most importantly Xylobands the excitement grew. And then with the first note of music we were off into another world, the world with A Head Full Of Dreams.

Looking back now, it was one of the best concerts I’ve ever been too – what am I saying… THE best concert I have been to so far. You might wonder now why I am so enthusiastic about it, so let me explain. It’s not just the music that is obviously great and the fact that Coldplay manage to make the songs sound even better live in most cases, it is the whole atmosphere that is very special. The music compared withe the colourful lighting, the huge amount of confetti, the pyrotechnics, the positivity of the whole band and especially Chris Martin, everything really.

Speaking of confetti, already during the first song, which was A Head Full Of Dreams, there was so much colourful paper flying around – it was stunning. Luckily the rain had stopped shortly before the gig and the sky started to clear up. Even the moon and the stars came out near the end of the concert during A Sky Full Of Stars – one of the many moments that gave me goose bumps.

Let me tell you a bit more of these moments. Of course The Scientist was simply beautiful but Fix You and Up & Up were the ones that made me cry. Such wonderful songs, that sound so amazing with Chris sitting at his piano and all the lights in the stadium. One of the big things that happened was the unusual performance of Everglow that night. There was a young man in the audience next to the B-stage with a sign asking if he could play Everglow on the piano. Luckily for him, Chris saw the sign and got him up on stage. You could tell that people didn’t know what to expect but Ferdinand was great. I found out from R42’s blog (one of Coldplay’s roadies) that it was extra hard due to the time delay on stage, nevertheless he managed to be really good. I have uploaded my video below, so that you can watch it. And there’s also a video from right in front of the stage on Coldplay’s Facebook.

What made me love the performance of Everglow even more was Chris’ introductory words that were quite political: “It’s important for Britain and Germany to work together… This is called Everglow. This is a German British Union, let’s go, let’s keep it together in Europe.” I applaud you Mr. Martin and I’m with you.

Another highlight was that they had decided to film the video for Something Just Like this on that night in Munich. We couldn’t really see what was happening on the little set with walls and a bed they buildt on the stage for the song, though. Hence, I’m really looking forward to seeing the video when it’s going to be released soon. But it was a great feeling to be part of it (kind of, we were way to far back to be seen) and the atmosphere during the song was amazing. I’ve put the whole video I took on YouTube as well – if you want to, you can watch it here.

What else was remarkable? Simply everything regarding the Xylobands and all the special effects. I tried to take pictures but it just doesn’t come out on simple phone photos and we weren’t allowed anything else. Though, I made a lot of videos especially because I was so overwhelmed by the view. And to let you see for yourselves, here’s all my videos put together into one to relive the gig.

Simply wonderful, right? I mean, I loved Coldplay’s music for nearly a decade or even longer but this one evening managed to make my love for them even bigger. Why are they so great, I still hear you ask? Well, first of all their songs vary from amazing sad and happy balads to dance songs and epic anthems. There’s a song for everyone and for some every song is one for them. Then Chris Martin‘s voice is a special one and his range is amazing. Additionally, Jonny, Will and Guy are amazing musicians as well, which makes their sound so great and special, even though the style of the music changed a lot during the past 21 years of Coldplay’s existence. But as I said already, it’s not only the music. It’s also the attitude of the band towards the world we live in, their believes and maxims as well as they act on them. The great charity work they do and their infectious positivity shows what amazing humans the four of them are and why it’s nearly impossible not to like them.

On that note, if you get the chance to go to one of their upcoming gigs – do it, even in case your not their biggest fan. It’s so worth it. There’s still some dates coming up all over the world, check Coldplay’s website for more details.

And last but not least, here’s the songs they played in case you want to know: 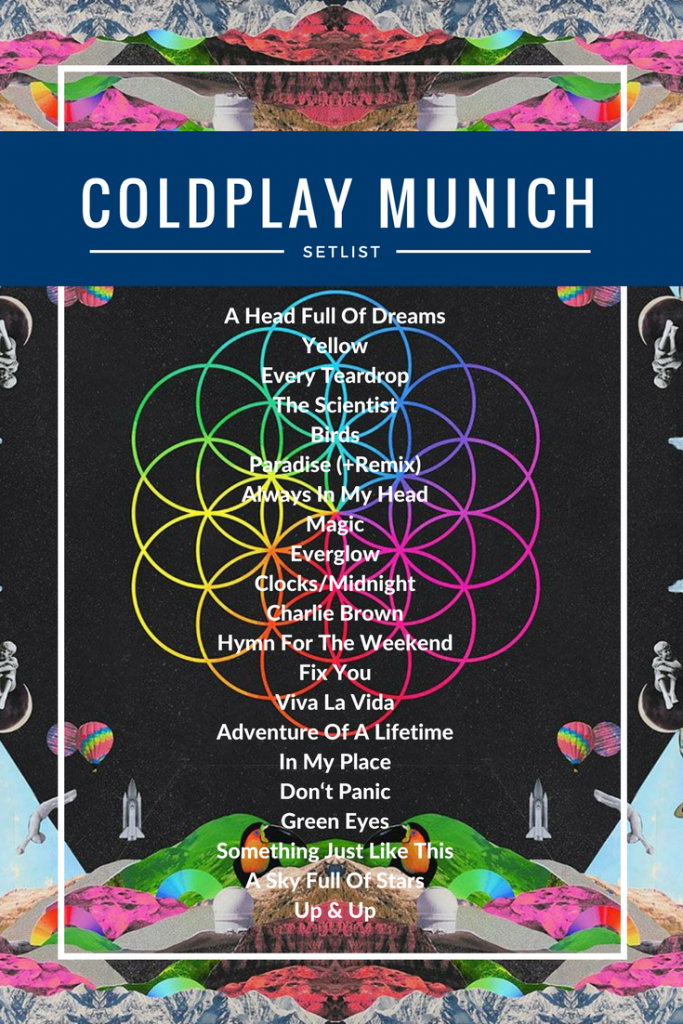