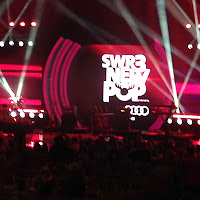 It’s been a weekend full of music and therefore this week will be a concert posts week special kind of thing.

I’ve been to the SWR3 New Pop Festival in Baden-Baden, which was brilliant this year. When I found out about who would be there this year, I knew I had to go.

Ella Henderson and Kodaline were some of the first artists to be announced and they’re both (well all five as Kodaline is a band) artists I’ve admired for years now, thinking about it both since 2012. So having both of them in one place would have been enough. And when the line up was completed it sounded even more brilliant with James Bay and Years&Years being added to the list.

I didn’t get tickets to all the shows, but have seen a lot of artists play on the free open air stage and I’ve also been to two of the “real” concerts: Kodaline and Ella Henderson, who would have guessed? And today I want to tell you about Ella’s. 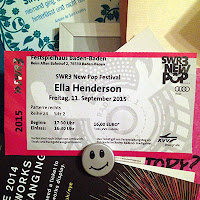 I was very thrilled, that I got tickets for her show. She’s a brilliant singer and songwriter!

I’ve actually followed her story from the beginning of her career, which was her audition for X Factor in the UK. I was watching the whole series that year and I still remember, that her first audition made me shed a tear as it was so beautiful. I was shocked when she had to leave the competition and didn’t make it into the Top 5, but now I’m glad she did because as she said herself she probably won’t be where she is now when she had gone further on the show.

Another thing I remember is when she announced she signed a record deal and then of course when her album finally came out last year. Chapter One is great by the way, you should listen to it.

Anyway, I wanted to tell you about the gig. I loved it! I was a bit sad about the audience being a bit boring, but I assume that wasn’t due to them not liking her rather that they didn’t know her songs that well. Because when she covered One Republic’s Love Runs Out and sang Ghost in the end the audience was finally participating more.

I was delighted that she performed her newest single which is a collaboration with Norwegian DJ Kygo called Here For You (Listen on Spotify). It was according to her the first time she has performed it, which is great to be part of. I think someone must have told her that Germans love dance tracks as she sang Glitterball, which is a collaboration with the British DJ duo Sigma.

I’m sorry that I don’t have any decent photos to upload for you, but my camera is currently being repaired and as we were “sat” in the last row, my phone was useless. But I’ve made a little video for you to get an impression of the show.

If you’ve liked this little snippet, you can watch the full concert on German telly on the following days and channels:

I can only recommend to you to go and see her perform if you can and/or listen to her album. If you’re into well made pop music and stunning voices, it won’t be a waste of time.

And if you already know Ella and her songs, what do you think of her? Have you seen her live already? Did you like it? Leave a comment below.