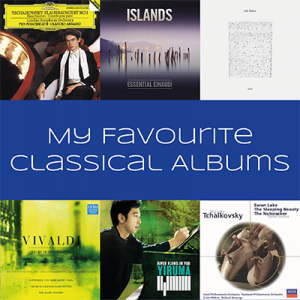 I like all kinds of music as you might have already realised whilst listening to my weekly playlists. But there’s one more music genre I like listening to from time to time: Classical music.

It’s the music I go to, when I am studying, writing or reading mainly because I don’t get distracted by the lyrics as there are none. But sometimes I go on a walk and listen to it and get lost in the music and that’s wonderful as well.

It’s not the type of music I use for my playlists and therefore I thought it would be nice to give you a bit of inspiration if you want something completely different to listen to. And what is better than a little list? Right, nothing. Hence, I decided to pick my six favourite classical albums from the ones I own and listen to quite often. There are a lot more brilliant composers out there, but I didn’t want to bombard you with too much information.

There are four albums that mainly contain piano music. I love the piano and playing it. I had lessons for about 8 years but sadly I am not really good at it – I wish I was. But what I am good at is listening to other people play the piano and I like it a lot. The other two are brilliant pieces by some of the greatest composers of all time.

I think this concerto is the one that made me fall in love with piano music in the first place. It’s so powerful. It’s all about the piano which is accompanied by a whole orchestra to support it. It’s really beautiful and shows all the facets of piano music.
(Listen on Spotify // Apple Music)

Islands is a collection of Ludovico Einaudi’s best compositions, a best of in a way and that’s why I chose it. The Italian composer is one of my favourites of our time along with Nils Frahm and film music composers Hans Zimmer and John Williams. This album shows why. His music is emotional, very colourful and stunning – it’s a delight to listen to it.
By the way he has also composed a lot of film music such as pieces for The Intouchables or Black Swan. But this album is the best way to start if you want to get to know him.
(Listen on Spotify // Apple Music)

Nils Frahm is a current German pianist and composer who creates very experimental and unconventional piano music. Every song of his is really special and unique and Solo is his newest recording, which is really, really good. By the way, he’s only 33 years old, so hopefully we will hear a lot more of him.
(Listen on Spotify // Apple Music)

This group of violin concertos is perhaps Vivaldi’s best known work and not without good reason. It’s amazing how he depicts the seasons in the music so that you can actually guess which one it is by listening only and get it right most of the time.
(Listen on Spotify // Apple Music)

River Flows In You // Yiruma

Yiruma’s album is another record full of dazzling and emotional songs. The title track River Flows In You and May Be are so, so beautiful and it is highly probable that you know at least one of them as they are really popular and get used a lot. But also the other tracks are worth listening to and show the variety of classical music.
(Listen on Spotify // Apple Music)

This album contains selected musical pieces from Tchaikovsky’s ballets Swan Lake, The Sleeping Beauty and The Nutcracker, which are one of the best ballets ever written if you ask me. And I’m not just saying that, because I danced in two of them back in the days when I was doing ballet.
Fun fact: I was a bat in The Sleeping Beauty when I was 6 and I had lost all my four front teeth right before our performances, so I looked ridiculous but somehow also very relevant.
But back to the music: Even if you don’t know the ballets it’s great to listen to and takes you on an emotional and, in case of The Nutcracker, a cultural journey.
(Listen on Spotify // Apple Music)

I hope you enjoy this slightly different music advice. When you had a listen, let me know which one is your favourite or let me know what’s the classical music pieces you like the most – I would love to hear from you, just comment below.