Monday has been a bad day and I wasn’t even excited about the gig, but the moment the band entered the stage I forgot about everything and just enjoyed the music.

And this is exactly why I love going to concerts so much. It’s already great to turn up your music in your headphones or on your stereo and shut off the world for a while. But seeing the band perform, have fun on stage and all the people around you enjoying the music as much as you do is just brilliant.

It wasn’t different on this one. I’ve never seen Imagine Dragons live before, but I’ve seen performances on TV and YouTube and I couldn’t wait for all the drums. 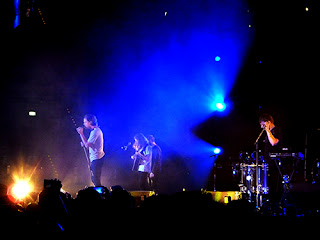 It was loud! I think it was one of the loudest concerts I’ve been to. And due to that the whole arena was full of energy. I loved how nearly the whole audience sag along most of the songs and got involved. Quite different to all the festival gigs I’ve been to lately. You could tell that loads of people in the room love the band and their music.

If you don’t know Imagine Dragons, they’re an Alternative Rock band from Las Vegas. You might know their song Radioactive, Demons or It’s Time as they are very popular also amongst non-fans.

The stage itself was stunning as well. All the mirrors and the light instalments looked beautiful. And of corse there was smoke too, who would have thought with it being the Smoke + Mirrors Tour (named after Imagine Dragons latest album). You can’t really tell from my photos/videos, because I was at the side of the stage, but I’ve seen pictures from the back of the arena and it really looked great. 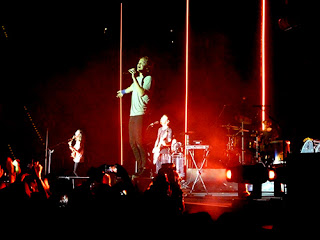 Looks great. Band great. Atmosphere great. What more would you want? Right. A new song. The guys played I Was Me for the first time. It’s a charity song which proceeds go to the UNHCR (The UN Refugee Agency) and the refugee chrisis. The Project is called #One4 (look that up on Social Media for more information) and is a cooperation of Imagine Dragons, SAP and Apple. The song is beautiful and Dan’s speech before it nearly made me cry.

Well, if that isn’t enough to be able to say it was a fantastic night, I don’t know what would be. You can still catch Imagine Dragons on tour as Mannheim was only the second date of a huge European tour. Check the dates and locations over on their website.

Finally here’s some impressions from the concert.

Quick question about this: Is it better uploading a video like this or do you like seperate videos for the song snippets more?

Do you like Imagine Dragons’ music? Would you go to one of their gigs? Tell me what you think.