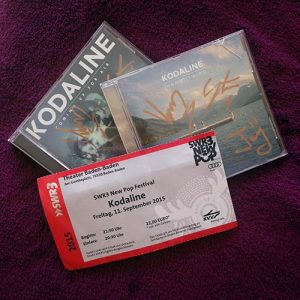 On Monday I already told you about the SWR3 New Pop Festival this year and the show of Ella Henderson. Today it’s time for Kodaline, my – sorry guys – second favourite band.
For the discovery of this band I’ve got to thank Grey’s Anatomy, Shazam and Google. Seriously. In 2012 All I Want by Kodaline featured in an episode of Grey’s Anatomy (one after that horrible plane crash – spoiler alert, hehe). I loved that song instantly and thanks to Shazam I found out which one it is. And apparently I wasn’t the only one who loved it: Google used the song in their Zeitgeist 2012: Year In Review video and I reckon that was a huge boost for the guys’ career.

Their stunning debut album In A Perfect World came out in 2013 and is a beautiful, relaxed and emotional Alternative Rock album. The second one was released this February and is called Coming Up For Air (click here to read my review). This one is more rocking and more energetic than the first one and it seems that this made them a bit more popular over here in Germany, because they finally got more airplay with the singles Honest and Ready. And also it seems that if people over here know them, they only know their new songs. That’s what I found out talking to the people that stood next to me at the show. The one guy didn’t even believe me, that I know them since 2012, because he thought Coming Up For Air was their debut album. Well, you were wrong, Mister. 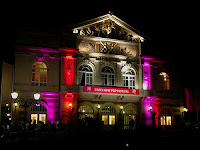 But I’m glad they still got invited to play the New Pop Festival despite not being actually new. I’ve seen them live before at Southside Festival, but only for two songs… You can read about that in the Southside post. But this has been the first longer gig I’ve been to (thanks to my broken foor in 2014…) and I enjoyed it a lot!

I was a bit afraid to stand somewhere in the back, because there already was a queue of about hundred people when I got to the venue. But funnily most of them wanted to get seats, so I got to stand in the second row – yay! 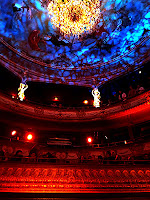 I have to spend a few words on the venue at this point. The concert was in the theatre in Baden-Baden, which is a beautiful building. Normally it’s used for plays, but at the festival they use it for gigs because it’s got this very special atmosphere and is just stunning. You can even tell that by my not exactly good phone pictures. Sometimes I wish the artist wouldn’t go inside before their show to soundcheck, because I would like to see their faces when they see it for the first time. I remember being gobsmacked when I first went there to see a play back in the good old school days.

Also,  the people around me were quite interesting. There was one girl who is a fan like me and then the other one I already told you about, who thought he knows everything, but didn’t. Moreover there was a couple in front of me, who didn’t know Kodaline before but got so excited during the concert. That was brilliant to watch actually. The woman was totally amazed and commented every song with “wow”. I loved her for saying out loud what I was thinking, not for her being irritated by me singing along all the time. 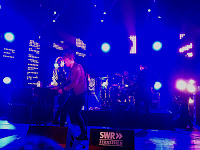 Anyway, if you haven’t had the pleasure to experience Kodaline live let me tell you they sound even better live than on the records. A lot of their songs already are very emotional, but performed live they also get this special energy that connects you with the music and makes you get lost in another world. When you go to see them, you will definitely have a great time (except you’re into Heavy Metall or EDM, then you might be a bit wrong there).

I’ve made a little video for you to get an impression of the show again – hope you like it.

And of course you’ll be able to watch the concert in full on German TV again – here’s when:

By the way, if you want to have some fun – watch the video of the Star Talk with Kodaline at the festival. Vinny’s phone rang and it was his mum. He shouldn’t have forgotten to put it on silent…

So that’s it for today. I can’t wait to see them again, which will be happening in February next year. Have you seen Kodaline live? Or are you one of those who have never heard of them before? Leave a comment below 🙂