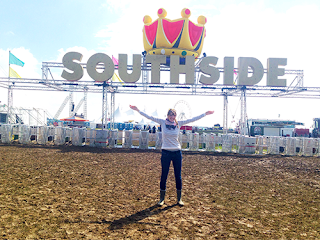 I know, I know – it’s Glastonbury, the festival of all festivals, this weekend and that’s the thing everyone’s talking about. But I’ve been to one of the numerous festivals in Germany last weekend and I thought it would be nice to tell you about that.
I’ve mainly been there to work, so I haven’t seen as many bands as the “normal” visitors, but I’ve seen quite a few and especially some I really liked, so I’ve still got something to report.

Have you been to a festival before? I haven’t. I never really wanted to. I was always looking at the line-up of several festivals thinking “Oh that sounds amazing”. But then I thought of how much money I’d have to spend and about how I’d have to spend my nights in a tent – I’m not really the camping type of person – and decided not to go.

Now I “had to go” because of work. Therefore I’ve not had the full festival experience: I slept in a hotel, I was working and hanging around backstage and only saw some of the acts in my breaks or after work.
But I reckon it’s been a good first glimpse at what festival life is like and it made me regret I haven’t gone before. It’s such a happy and funny atmosphere, the people are all in a very good mood and there’s so much music to discover. I think I’d be one of these people trying to see as many bands as possible missing out the “other fun”, but I’d be very happy with it. Which festival visitor type are you? Tell me in the comments below.

As I haven’t got a lot more to report about the feeling at Southside, except that I’ve only met very nice, funny and slightly weird people, I’m going to give you a summary of the artists I’ve seen.

The first full song I’ve really seen and not just heard from far away was “Stolen Dance” by Milky Chance on Friday night. They’re a German band, but I think they’re known all over the place for this song, at least I somehow remember hearing it on BBC Radio 1 once. It was a good song to start my free time in the evening, I was instantly in a very good mood and excited for more.
Then we saw a few songs by Madsen, another German band until it was finally time for Florence + The Machine, who were the band I was looking forward to a lot.
And I was right to be enthusiastic about Florence. She and also the band were marvellous. Has anyone of you seen them? Florence’s voice is just stunning. She sounds like on her records or even better. That’s exactly what makes a good gig. And she’s a somehow weird but wonderful performer/person as well. I just loved watching her.

My Saturday night consisted of the Parov Stelar Band, a little bit of The Gaslight Anthem and then finally alt-J. Parov Stelar is a DJ who’s a trailblazer to Electro Swing. He and his band, including drums, a bass, a saxophone, a trumpet and a singer, make well-danceable music which is a mix of electronic music, Jazz and Swing. I had a good time just dancing around for a bit (and avoiding to get dirty by those people having loads of fun in the mud puddle. The ones I really, really wanted to see this evening were alt-J, but there was still a bit of time left until they were on, so I went to see a bit of The Gaslight Anthem. They’re a Punk Rock band from Canada and were quite good as well. I just had the feeling the singer needs a bit of voice rest soon…

Then it was finally time for alt-J. And what should I say… I’m glad, that I’ve got a ticket to see them again in November. I had the best time. I’ve already written about the guys and one of their singles. Their music is just stunning. I like it for being so different to everything else in a very beautiful way. It’s not music to really dance to, I heard people complain about that somewhere in the crowd near me – It’s music to enjoy for music’s sake. It’s creative, complex and witty, a mix of Indie, Electronica and Alternative Pop. It’s special. And definitely not boring! If haven’t heard of them yet, give it a go and maybe even go to see them live, they’re still touring throughout the year.

That was Saturday. My Sunday highlight was the short break from work in the afternoon to see at least two songs of Kodaline. I’ve told you about their current album at the beginning of the year and as you might already know I’m fond of them and they’re music and wanted to see them live last year, but broke my foot two days before the concert… So it was great to see them play a big crowd at Southside and I came right in time for “Play the Game” which is one of my favourite songs by the boys. Perfect. That’s another “Go see them, if you get the chance!” from me.

The first full gig I’ve seen that day was George Ezra, which was a lot of fun. My colleague and I had a good time dancing and singing along to his music. It instantly puts you in a good mood. And I love how he tells stories from his journey through Europe. And he’s cute to be fair 😉

The rest of the evening consisted of Cro, a German rapper / Pop singer, a bit of Jan Delay, who does Funk music, a DJ-set by Klingande and Marteria, another German rapper.
Of Cro I was a bit bored to be honest. I like some songs he does, but they’re all very similar and therefore it’s getting a bit monotonous to listen to him for over an hour. However he tells a lot of jokes and funny stories on stage what made it better.
Jan Delay on the other hand is fun. His music makes you dance, even if you don’t really like it. Still I haven’t seen a lot of it, because we went to see Klingande, a French deep house producer, who’s known for the special use of saxophone samples. You might know his single “Jubel” which had international chart success. I’ve never been to a DJ gig before so I was curious to see if it’s good and fun. And it was. The whole tent was just like a very big party watching the DJ from time to time, especially when the sax player he had with him was on stage.
The last act of the whole festival was Marteria. I can’t tell you a lot about him, because I’ve only seen the last three songs and I’m not very fond of German Rap / Hip Hop… But it was alright and the crowed loved it.

Well, that’s it – that was my Southside Festival 2015 and my first time at a festival. And I want to do it again. Properly. With camping and everything. Maybe one day I’ll even be at Glastonbury.

Which festivals have you been to already? Have you seen some of the acts I talked about? Did you like them or not? Tell me in the comments, I love to hear from you!

Oh and one last thing: You can watch all my videos from the festival on my YouTube Channel and a lot of better videos over on DASDING.de