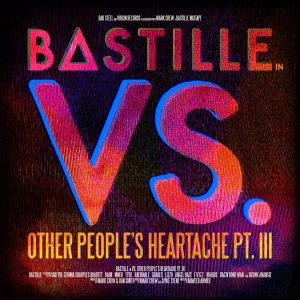 Here’s something I was looking forward to for quite a while now. Bastille’s new mixtape VS. (Other People’s Heartache Part III). As you presumably know they’re one of my favourite artists and therefore I’m always very excited to hear new music from them.

Even though it’s less really new songs than ecpected it is still brilliant! I’m lying, it is six and a half new songs, only the first one were heard on other records in different versions previously. The half one is the cut off rap part from Torn Apart, don’t get confused. The songs just don’t feel new to me, because most of them were played on radio before and I listened to them a lot, because I really liked them and couldn’t stop.

But now, listening to them all on one record, is a different experience. Even though there are so many different artists, sounds and I’d even say genres mixed on that album everything fits together. That’s definitely good work. I’m excited in which of all these directions their music will go for their next “real” album.

The single to be released from this mixtape is Torn Apart (vs. GRADES) and it is a great  choice, I hope it does well as it’s one of my favourite tracks. The other ones are bad_news (vs. MNEK), because the lyrics are so true and Bite Down (vs. HAIM), which is definitely funky. I seem to have a fondness for the vs.-artists written in capital letters.

Furthermore I somehow love Skunk Anansie singers voice on “Remains” (vs. Rag N Bone Man vs. Skunk Anansie). The song gets a different touch, a very rocky one, to what it sounded like asa “Skulls” on “All this Bad Blood”, the re-release of their debut album “Bad Blood“. And Rag N Bone Man’s voice is very interesting as well, which made me download his EP “Wolves” instantly.

The only song not featuring another artist is fantastic as well. It’s called “The Driver” and was written for a rescore of the film “Drive”. I’ve seen that rescored version of the film and the song is perfectly for the scene it belongs to, very well done!

So as you can see, I’ve got something special to say about nerly every song on this LP. I hope you’ll see that as a good sign and you’ll get it for yourselves to enjoy it. It is out now as download, CD and on vinyl. Or you can listen to it on Spotify here.