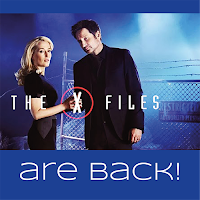 Sunday – or should I say Monday – is the day! Time zones are a weird thing sometimes, aren’t they?

Anyway, it’s the day The X Files will be back!

I never thought Mulder and Scully would be back again on my telly, but they are. I really hope the show has gotten even better with age (or stayed the same, that would be alright as well). And fingers crossed that I will find a way watch it and I won’t have to wait until February. I can’t avoid social media for a month.

To celebrate the return of one of my favourite TV shows I thought it would be nice to list five reasons why I am really happy and excited about it being back.

By the way, X Files was the reason why I wanted to become a forensic doctor for while, when I was about 9 or 10. Just to make me sound even weirder.

If you’re not as excited as I am, watch the trailer below and I hope then you will be eager to watch it too.

Will you be watching? Enjoy it my friends and let me know if you liked it. And if you’re a true believer yourself.

I want to believe!