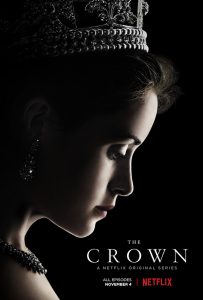 It‘s nearly Christmas! Many of us are looking forward to the festivities with their friends and family. Or if you aren‘t celebrating Christmas, you might have a nice little winter break as well. It‘s the time of the year to get cosy and cuddle up on the sofa. And maybe binge watch a great series together? If that‘s what you want to do (and you have a Netflix subscription), I have a tip for you: The Crown.The first series of the Netflix original was released in November and in my opinion, it‘s a must watch. It‘s informative (even though it‘s „fiction“), dramatic and to some extend even a little bit funny. I said it‘s „fiction“ but it‘s of course based on a true story, hence the quotation marks.

The first series of the Netflix original was released in November and in my opinion, it‘s a must watch. It‘s informative (even though it‘s „fiction“), dramatic and to some extend even a little bit funny. I said it‘s „fiction“ but it‘s of course based on a true story, hence the quotation marks.

Portray with all the trimmings

The Crown will tell the story of the life of Queen Elizabeth II starting from her wedding in 1947 to the present, with various flashbacks to her childhood. The first series covers the first years after her wedding, *spoiler warning for history haters and time travellers from the past* the time of her father‘s death and her coronation up to Churchill‘s resignation in 1955.

Yet, it‘s not just the life and reign of Queen Elizabeth II, that is told. The Crown is also about her personal life. About the struggle to be a good sovereign and a loving wife and mother at the same time. Additionally, the viewer gets an insight into the lives of Prince Philip, Princess Margaret and other members of the Royal Family as well as well-known politicians like Winston Churchill. But bare in mind, that whilst the outline is based on historical facts the insights into the characters’ private lives is fictional. Even though the making of The Crown makes you believe it‘s real from time to time, as the story is so lovingly staged.

Not only the storytelling is great, but also the cast. Claire Foy‘s portrayal of the Queen is impressive. For a while, I forgot she‘s not actually a royal and that I‘m not watching documentary material.

Also, I (for those who know me very obviously) love Matt Smith‘s performance. It seems that he has been made for playing Prince Philip. Apparently, Prince William (the real one) gave Smith the advice, that his granddad is a legend. Smith is definitely acting that out.Nevertheless, it‘s bugging me, that I‘m still waiting for the whole show to turn out to be a Doctor Who special in which the Doctor married into the Royal Family – again. I probably shouldn‘t have watched every episode of Doctor Who at least three times, I‘m going mad…

Anyway, time to return to the subject. Likewise, the rest of the cast impresses with great performances. Outstanding for me are for example John Lithgow, who plays Winston Churchill, and Jared Harris, who slipped into the role of King

Nearly every little girl wants to be a princess, right? This series shows that being a real princess is rarely the same as being one of these Disney princesses we all admire. It‘s maybe not really what a little girl should want to be. The Crown shows how much strength and discipline is required to be a monarch and how hard living a life in the public eye can be. It‘s a lovely and yet dramatic portrait of how the life of the British Royal Family might be like. The Crown is a thrill to watch.

En passant, I can‘t help but wonder if the Queen has seen it and whether she likes it or not. One must be curious when one‘s life is portrayed in a whole series. And is she using Prince Harry‘s Netflix account? Most likely, we will never know.