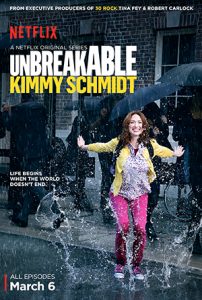 I was alone at home for a few days and in my loneliness I started to watch Unbreakable Kimmy Schmidt whilst having dinner, because I needed something funny and entertaining whilst eating. I was searching for a series with short episodes and as I’ve got a NETFLIX subscription I looked on there for something to watch. I stumbled upon the Netflix sitcom “Unbreakable Kimmy Schmidt” that was created by comedian Tina Fey.

First of all, I’ve got to say I’m not the biggest sitcom friend. I never really watched How I Met Your Mother or Two and a Half Men. I loved Friends though and watched every episode at least twice and I’m even more fond of The Big Bang Theory of which I even know some parts by heart and don’t think there’ll be anything better any time soon. Nevertheless, I decided to give this one a go (especially as there were no new The Big Bang Theory episodes left to watch) and it was a good choice to be fair.

The initial situation of the series reminded me of “Blast from the Past”, the film where a man grew up in a bunker and then goes out into the world after 35 years.
There are four women, who get freed after they were locked up in some kind of bunker for 15 years by a psychopatic reverend. Three of them go back home, but Kimmy Schmidt (played by Ellie Kemper) decides to start a completely new life in New York. She hides her identity to get rid of all the people feeling sorry for the Mole Women, as their known all over the country due to media reports.

Even though Kimmy is struggling with modern day technologies (internet, smart phones,…) and doesn’t really know how to live as an adult, she seems to know more about life than the people she meets. Still Kimmy makes her way, she finds a room and a workplace and she surely enriches the lifes of her new found friends. And of course the past catches up with her, which is where the little bit of suspense is coming from. Here’s the trailer to get a first impression:

Altogether Unbreakable Kimmy Schmidt is an entertaining sitcom and a great story about a strong woman. It stands out due to its brightly coloured set design (especially Kimmy’s clothes) and its exaggeratedly stereotypical New Yorker characters like Kimmy’s gay flatmate Titus or her employer Jacqueline. It’s fun to watch and it’s a nice dissipation.

But for me it’s a bit too funky, a slight bit too much, which didn’t make me stop watching but made me a little bit annoyed sometimes. They seem to have tried to put even more than one joke in every scene which is a bit too much for me, not because I don’t like jokes, I love funny things, but the story is also a quite emotional one and that’s suffering a bit from all the jokes. I know, it’s comedy and not drama, but after all a little bit of compassion never failed to make one warm to a character.

However I’ll certainly watch the second series because I had a great time and good laughs watching it. And maybe it will be even better.

Have you seen the series? What did you think of it? And what’s your favourite sitcom? Leave a comment below.

The Invisible Man by H.G. Wells