The book I’m presenting today is an old one. But a good one. Probably my favourite book of the early 20th century (at least of the one’s I’ve read so far). And it’s one of those books I’ve even got two editions of, the German one I read when I was younger and the original English version I read when I was able to understand it.

The book is called Rebecca and it was written by Daphne du Maurier in 1938.

And I’ll be telling you about it, because I’ve got the feeling that Daphne du Maurier, who has written it is way too underrated. Sometimes people I talk to about her know the stories, but don’t know she’s written them. They all think it was Hitchcock, because he made the films.

Daphne du Maurier was born on 13. May 1907 in London and began writing when she was 18. At first she wrote a lot of short stories, but then also novels, plays and biographies. As she married she moved with her family to Cornwall, where most of her stories take place, because the wild, stormy weather and wild past inspired her imagination.

She got famous because of her suspenseful and empathetic way of writing. That’s also why many of her narratives and novels have been made into films. Three of them, namely Jamaica Inn, The Birds, Rebecca, by Alfred Hitchcock. And I bet you know at least one.

I think “Rebecca” is her most famous novel, but don’t forget about the short stories, they’re great as well.

Anyway, on to what the book is about: The main character of the book is a young girl, who works as a companion and one day comes to Monte Carlo with her employee. She tells you the story of how she’s gotten to know the wealthy widower Maximilian de Winter and fell in love with him. The two got married after a short time and Mr. de Winter has taken his second wife to his home Manderley in Cornwall. 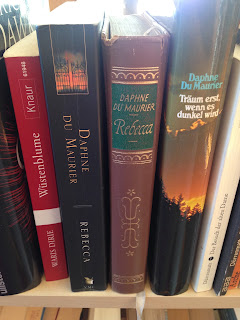 That’s where the real storyline sets in. The nameless narrator thinks, that the property is eerie and that the ghost of Rebecca, the first wife of Maxim, is still living in the house. Everything is kept like it was, when Rebecca was still alive and especially the housekeeper Mrs. Danvers tries to point out to the new wife, that she is no match for Rebecca.
The life at Manderley becomes like a nightmare for the young girl, but she loves her husband so much, that she accepts it. But she’s set to find out the truth…

“Rebecca” is a thriller and a romance novel at the same time. And that’s what I love about it. It’s about the balance of power in marriage and about the revelation of the secret of Rebecca.

And what’s also amazing is the subtlety, which makes you scared even though nothing brutal or violent is happening. No surprise it made such a good Hitchcock film. I’m a huge fan of suspense thrillers like that. No huge amount of blood, people running around with weapons killing loads of other people only a spine-tingling story that makes you feel scared.

If you haven’t read the book or seen the film, do it! Your best would be to do both, I’m serious. The film is staring Laurence Olivier and Joan Fontaine, a great adaption of the book. And that’s something I’m not saying very often.

And if you have read or seen it, let me know what you thought! Maybe you have a completely different opinion? Or you’re totally on my side? Let me know.

Lots of love, have a great weekend!
Julia x

Or get the film: