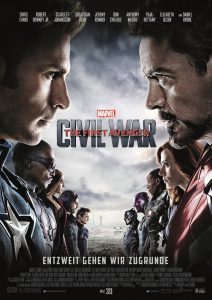 Twelve superheroes getting into a conflict that ultimately makes them fight each other.

Wow – Captain America: Civil War is 147 minutes of thrilling storytelling. I would say it is the best film of the Marvel Cinematic Universe yet. It is dramatic, witty and thrilling.

It’s really good that there isn’t one big really bad guy they have to fight (there is someone, but he’s not the main problem) all the superheroes are fighting against and that instead they are up against each other. It is an opportunity to get to know our heroes a bit better, what their characters are like as well as how they think and Marvel has taken this opportunity very well. You get to know more about the relationships between them which is brilliant – it adds more emotions to the action-packed film.

Captain America, Iron Man, Black Widow, Falcon, War Machine, Scarlet Witch, Vision, Hawkeye, Black Panther, Winter Soldier, Ant-Man, Spider-Man – it’s a bit of work to understand everything going on with all the characters, but it’s definitely worth it. If you make sure you’re up to date with the Marvel Cinematic Universe (at least with the films) it will be a bit easier to keep up.

The fight scenes are beautifully choreographed and fun to watch. The introduction of the new characters Black Panther and Spider-Man is very well done and the actors very well picked. Especially Tom Holland as Spider-Man is turning the superheroe alliance on its ear. He might be a bit naive but he is so cute and witty at the same time. It is going to be exciting to see the new heroes in their own movies.

All in all, Civil War has a great balance of action scenes like fights and chases and emotional scenes with encounters of the characters either funny, sad or angry. It feels like it’s the most thoughtful and mature film in the anthology. Watch it!

If you have seen it already, let me know your opinions in the comment section, I would love to hear them.