Fantastic Beasts and Where to Find Them [film review] 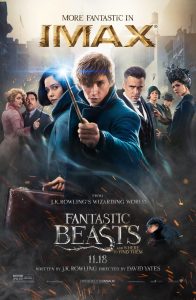 Attention – I ticked off another one on the list – two in two weeks, it’s going fast now, yay! I went to see Fantastic Beasts and Where To Find Them in IMAX and loved it a lot! Maybe that’s enough of an opinion already, but for those who want to know a bit more, here’s more.

As someone who has grown up reading the Harry Potter books and then watching the films when they came out, I was very excited about finally getting a chance to return to that magic world. So I put on my Hogwarts jumper and dragged my family to the IMAX cinema to dive into the new story. And I am so glad I wasn’t disappointed.

Fantastic Beasts and Where To Find Them is set in said universe of Harry Potter, only years before he lived. It’s set in the 1920’s showing a slightly different take on the wizarding world created by J.K. Rowling. Additionally, the story is set in America, so it’s a whole new world (to say it in the words of Aladdin).
Times in New York are troubled. The secret about the wizarding world might be revealed due to attacks by the dark wizard Gellert Grindelwald. Newt Scamander, the main character, who is from London arrives there with his suitcase full of magical creatures. A mix-up with a similar looking suitcase of a “No-Mag” (a Muggle for the British wizards) and the escape of some of his beloved creatures gets Newt and the whole wizarding world in all sorts of trouble.

I don’t want to spoil anything, hence that’s all I will tell you about the story itself. For some more impressions watch the trailer at the end of this post.There are definitely a lot of things happening in the film. Some are just cute and beautiful like the tour of Newt’s suitcase we get eventually, that feels like an amazing trip to a magical zoo. Others are upsetting like the attacks happening and the MACUSA (Magical Congress of the United States of America) struggeling to keep the wizarding world a secret. There’s something in it for everyone – provided that you like Fantasy films. And if you’re a Harry Potter fan you will love it. There are little hints on people, that will appear, and things, that will happen in the storyline of Harry Potter itself. Those made me want to read the books again, which I will definitely do on my leisure.

Speaking of the characters appearing in the film, some of them are a bit weak. But the main characters are great and I hope we will get to see them all again. Not least because the cast is very good. Whilst the very brilliant Eddie Redmayne plays the cute adventurer and Colin Farrell, who has a big part in it too, are well known actors, the rest of the cast isn’t that famous. But nevertheless they’re brilliant and great picks. Especially Dan Fogler delivers a brilliant perfomance. He is playing the No-Mag that is dragged into the events and is going through a lot therefore. And he delivers it very very well. Katherine Waterston and Alison Sudol play two of the female lead characters and they are lovely. Oh, and there’s a surpise appearance by someone you most definitely know so watch out for that.

All in all, Fantastic Beasts and Where to Find Them is very well-done expansion of J.K. Rowling’s wizarding world. It’s a great adventure, it has great characters, a solid storyline and it looks amazing! If you can, go and see it in 3D or especially IMAX – you will feel like you’re actually there!

There’s a second installment planned for 2018 and I am really looking forward to that now! Are you a Harry Potter fan? Have you seen Fantastic Beasts and Where to Find Them? How was your experience? Do you have a favourite scene? I would love to hear from you!