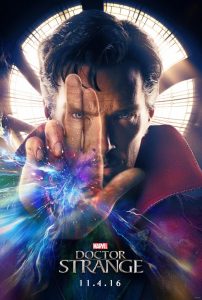 I finally managed to tick another film on a list – Doctor Strange. Remember when I shared my cinema anticipations for this year with you? (If not, you can read the post here.)

Sadly, I only managed to see one of the listed films until last weekend. But finally, I went to see Doctor Strange in the cinema.

I said “it’s going to be legendary!” and somehow it was – even though I honestly expected a little bit more.

For those of you, who don’t know which film I’m talking about: Doctor Strange is the latest Marvel universe movie. It marks the introduction of Stephen Strange to the audience, who will appear in some of the other Marvel adventures to come.

Stephen Strange is a prestigeous neurosurgeon – well – he used to be. Until he has a car accident and hurts his hands in a way he won’t be able to perform surgery ever again. His frustration and search for a cure to his problem brings him to Tibet where he discovers and acquires his true powers. He’s soon to be become a powerful master of the mystic arts.

It is an exciting story, definitely. What’s also awesome is the cast. Doctor Strange is played by Sherlock Star Benedict Cumberbatch, who I (if you’ve been following this blog for a while already) obviously adore. I was a bit annoyed by this choice at first, as it’s quite predictable. Strange’s character traits and some parts of the comics (I read some of them) are quite similar to his Sherlock portayal. But at least it meant that we could be sure he’s going to be amazing. And he was. Other cast members are Tilda Swinton (The Ancient One), Chiwetel Ejiofor (Baron Karl Mordo), Mads Mikkelsen (Kaecilius) and Rachel McAdams (Christine Palmer). Brilliant, right? Mikkelsen is one of the finest actors when it comes to playing villains these days. He’s really good. And Tilda Swinton doesn’t fail to impress in her slightly odd role (what else?) too. The cloak! I love the cloak, it’s so cute. But it doesn’t count as cast, does it? Anyway, everyone starring in this film is a good pick for sure. Marvel once again nailed their casting.

When it comes to the writing though, I would have expected more. As mentioned before, I have read a few Marvel comics and most of them are Doctor Strange ones as they are somehow funny and I really like the character. I hoped for more wit and punch lines. But there only were a few. The comics sometimes have this unintentional jocularity, which I really like, and the film is missing this a little. However, given it’s the introduction of an important character for the Marvel universe and hence there were lots of stories to tell, it was done quite alright. There were a few lengths, but overall it was still better than some other of the earlier Marvel films. But it’s also not their best one.

Visually a treat to the eyes

Nonetheless, Doctor Strange is certainly one of the visually most brilliant films I’ve ever seen. And in my The comics may be funnier and a little better story-wise, but when it comes to beauty, the film wins (not that the comics aren’t good looking as well). The twisted realities, the weapons created out of thin air, unearthly creatures – all of it looks stunning.
It reminds me a little bit of Inception (remember the bending streets?) and it goes even further with the effects.

All in all, I enjoyed myself a lot, especially due to the visual magnificence. Nevertheless I hoped for a bit more fun. The film is of course a must for all Marvel adn/or Benedict Cumberbatch fans. And for everyone who loves visually amazing action/fantasy films. If you can, go and see it in 3D or IMAX, then it’s even better.

Have you seen Doctor Strange already? What do you think of the film? I would love to hear from you!