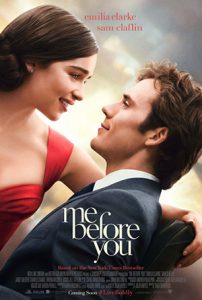 This film is the lovestory of the summer and at the same time one of the best book adaptions I have seen recently.
Me Before You is based on the book by Jojo Moyes, who also wrote the screenplay for the film and I have the feeling that this is the reason why it’s so close to the book.

For those who haven’t read the book, here’s what Me Before You is about (it’s the blurb of the book):

Lou Clark knows lots of things. She knows how many footsteps there are between the bus stop and home. She knows she likes working in The Buttered Bun tea shop and she knows she might not love her boyfriend Patrick.
What Lou doesn’t know is she’s about to lose her job or that knowing what’s coming is what keeps her sane.
Will Traynor knows his motorcycle accident took away his desire to live. He knows everything feels very small and rather joyless now and he knows exactly how he’s going to put a stop to that.
What Will doesn’t know is that Lou is about to burst into his world in a riot of colour. And neither of them knows they’re going to change the other for all time.

The film is great to watch whether or not you read the book – it’s so close to the book and made with so much love for the book, that the one’s who have read it won’t be disappointed and it’s such a great, funny and touching story, that you don’t need that little bit more backstory that reading the book gives you.

The cinematography is amazing, I loved the shots of the beautiful little town it’s set in, the scenery is great and the characters are drawn just like I imagined them.

What I was a bit disappointed by was the cast. Don’t get me wrong I liked the people they picked, they seemed right and they aren’t all bad. It was just in some scenes, that I noticed that they’re acting and aren’t the person they’re supposed to be and that’s always a bad sign. Maybe parts of it even were due to the German dubbing, so don’t worry about it too much and also it wasn’t too often and overall it’s still a great performance by everyone. And I was happy to see Jenna Coleman on the big screen again (that’s the Doctor Who fan in me talking…).

But apart from this little disappointment, I adored the film as much as I loved the book. It’s not a off-the-rack lovestory, it’s different. It’s witty, lovely, cute and heartbreaking.
Me Before You is perfect to see with your girls (if you are a girl) and also a great date movie. Just make sure to wear your waterproof make-up and bring enough tissues.

Let me know wht you make of the film (or the book or both) – simply leave a comment below, I love hearing from you.

And last but not least, here’s a little look at the film: