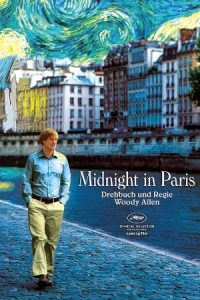 Normally I don’t get Woody Allen’s films and I don’t like them, but this one was amusing, fascinating and quite brilliant.

Somehow I’ve got to thank Netflix for making me watch it. I wondered why it always showed up in my suggestions on what to watch, especially because all I watched on Netflix lately were some Sci-Fi/Fantasy films, Orange is the New Black, Sherlock and Doctor Who. But maybe it was the latter which brought it up, because of the time travel. But seriously, I wanted to watch it after Allen won an Oscar for writing it, but I forgot about the film and I’m glad I’ve finally seen it.

I already mentioned time travel, maybe I should tell you a bit about the film. It’s said to be a romantic comedy, but it’s not what you think, it’s not that typical boy meets girl and falls in love one. It’s more of an adventure, a journey.

The films is set in Paris, where Gil Pender (Owen Wilson), a screenwriter and author, travelled to with his fiancée Inez (Rachel McAdams) and her parents. Gil is currently trying to finish his first novel and loves to move to Paris, whereas Inez just wants him to work in Hollywood as a screenwriter to afford a life in Malibu. During their vacation the pair are confronted with their discordance.

But the main story is about Gil’s strolls around Paris at night. On the first night he wanders around on his own, because Inez didn’t want to and then, at midnight, he meets some people in an old car dressed up in 1920s clothes. And somehow he ends up at a party in the real 1920s, an era he idolizes and he meets a lot of famous people, who are very important to him. He for example meets F.Scott Fitzgerald and his wife, Ernest Hemingway and Cole Porter. But some time later at the end of the night, he finds himself back in his time again.
I don’t want to tell you what excactly happens, you should watch it yourselves. He gets back to the 1920s and it’s an adventure.

It’s nearly unpredictable what’s going to happen and who he is going to meet next. And that’s what I liked most about it. Additionally the film communicates the fascination for Paris as an inspirational city for artist and tells about what it must have been like, when all the great minds met up there in the past.

So that’s what I think and I’m excited to hear if you’ve seen the film and what you thought about it.