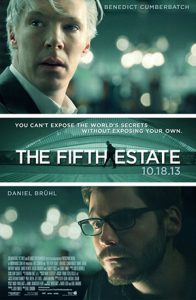 Three years after it has been released this film is still relevant. The Fifth Estate is one of these films you should have seen at least once.

It sadly flopped when it comes to the takings-to-budet ratio in 2013, which might be due to the heavy topic and the fact that it isn’t an easy watch, but it is still worth watching.

The Fifth Estate tells the rise and fall of Julian Assange (Benedict Cumberbatch) and his underground watchdog organisation WikiLeaks. IIt flashes back from the biggest data leak in history in 2010 to the creation of the network and tells the story of the white-haired genius Assange getting in a conflict with governments and intelligence agencies, co-workers and friends and also himself.

The film focuses on the relationship between Julian Assange and WikiLeaks spokesperson Daniel Berg (Daniel Brühl), which is reflecting the tension between investigative journalism, the hunt for the truth, integrity and moral that WikiLeaks was facing with its revelations.

The film is a biopic that couldn’t be more thrilling and upsetting than it is. Or maybe it could – I was a bit disappointed that the film makers obviously tried not to provoke to much and was very careful with allegations against Assange as well as the media and governments involved. There could have been more.

But what I really enjoyed about the movie was firstly the fast paced storyline, that kept the viewer involved and attentive and secondly the amazing cinematography. It is amazing how the film-makers managed to visualise all the online communication and technology that is very relevant for the story. The analogy of the slightly old-school news room that seems to be infinite standing for the submission platform of WikiLeaks is very elaborate and helps to illustrate the virtual world in which most of the film is set in.

Another thing turning the film into a great watch is the outstanding cast. Everyone’s and especially Benedict Cumberbatch’s and Daniel Brühl’s acting is on point. You can tell that Benedict Cumberbatch has done his research and studied the appearance of Julian Assange very in-depth, his portrayal is absolutely brilliant. Also, Alicia Vikander, who plays Daniel Berg’s partner, is great as well.

And a little extra for all Sherlock and Doctor Who fans out there: Sherlock finally meets the Doctor, Peter Capaldi is in it as well.

Jokes apart, The Fifth Estate is thrilling, compelling, upsetting and to some degree even scary. It is a great attempt to tell a very important story about some of the biggest data leaks so far and it is certainly a film you shouldn’t miss out on.