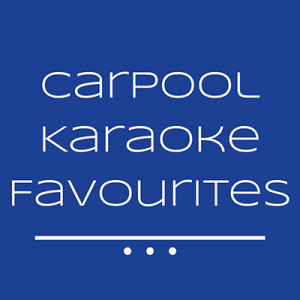 After the joy of watching Carpool Karaoke with Sia yesterday, I thought it might be cool to present you to my favourite participants in this feature.

What? You do not know what Carpool Karaoke is? You have missed something so far.

It is a segment of The Late Late Show with James Corden, where James Corden picks up musicians in his car, has a chat with them and they sing along to some songs – it is so entertaining.

And because I do not want you to miss out on it I have picked my five favourite editions of these special sing-along interviews. I hope you’re up for having some fun and a little singing session of your own, because it is contagious.

5. Sia
I’ve already given this one away in the introduction to this post. Sia’s appearance on Carpool Karaoke is somehow why I’m even doing the post. Nevertheless it’s only in fifth place as there’s a lot of other delightful ones. But Sia’s wig-related clumsiness is very funny already.
And of course I really enjoy the singing parts as some of her songs are so great (read my review of her latest album here).

4. Chris Martin
What I enjoy a lot about the drive with Coldplay’s Chris Martin is not only the songs (I really, really like Coldplay’s music) but also the whole story they made up around it with Chris Martin as a hitchhiker. The pitstop, the hats, the lemonade and them ending up in a motel bed – that’s priceless.
The other hilarious and also brilliant thing is Chris bringing along a little keyboard and is playing it inside the car. I’ve never seen that before.

3. Stevie Wonder
The last three were hard. I’m still not sure, if I ordered them in the right way. But in third place it’s Stevie Wonder. What a man, but thank god he didn’t drive.
It’s so funny how he’s facetiming various people during the drive and he makes the best jokes. And he made James cry! It’s so cute when he calls up James’ wife and sings I Just Called To Say I Love You.

2. Elton John
This one with Elton John is the winner when it comes to costumes. The The Circle of Life bit is my favourite part – that lion wig! But the feather boas aren’t a bad accessory choice as well. The singing parts are great as well of course – what a voice and the greatest songs.
And what did I learn from this one? Elton John doesn’t own a phone and doesn’t know how to pronounce Ed Sheeran’s name.

1. Adele
She won for her laughing only. No matter if you think the jokes and stories are funny or aren’t, you will have to laugh every time Adele is laughing. Also I love when James surprises Adele with his singing at about 1:30 minutes in – the look on her face is just brilliant.
The stories she’s telling, her spilling her tea and then downing it and her moves when singing along to that Spice Girls song is just hilarious.

And this were my Top 5 Carpool Karaoke videos. And one last remark: I’m always fascinated by how good James Corden’s singing is, he’s really great.

I hope you enjoyed watching (some of) the videos and I didn’t waste your time. Which one is your favourite? Or is it one of the ones I haven’t got on my list? Leave a comment, I love hearing from you!