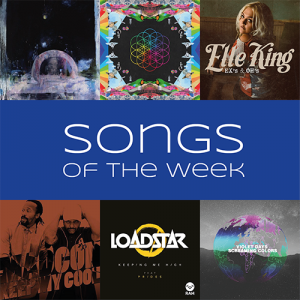 Hello, hello! How are you all? Gotten all your Christmas presents yet?

If you haven’t switched to your Christmas playlists yet, I’ve got some new songs for you again.

After that slightly depressive but beautiful list last week, I tried to make it a bit happier this week with all the Christmas partys coming up now.

I might have failed with the first two songs, but they were just to great to not be put on this weeks list. And the remaining four are the ones for your happy list.

I know I prromised happy songs, but I want to build up a bit of tension. I liked this one way too much to not put it onto this list.
Numbers is the second single to be released from Daughters upcoming album Not To Disappear, which is out on 15th January. It’s a dreamy, moody song. Loose yourself in it.

I think I’ve found a new favourite Coldplay song in Everglow, it’s not replacing old favourites of mine, but it’s been added to the list. This beautiful track is taken from their new record A Head Full Of Dreams, that was released last Friday. Another new favourite of mine is Up & Up, which also features on the album. Listen to it, it’s really great.

I wanted to put Elle King’s Ex’s and Oh’s on last weeks playlist already, but it didn’t fit in. But now the right time has come. I love the country style, great guitar riffs and powerful atmosphere of the song. And the rhythm is fantastic, it makes me dance and happy.

This is one of these song, that I didn’t like when I first heard it on the radio a while ago, but can’t get out of my head now. Keep My Cool is a funky and dancy song, which brings a bit of summer into the dark days when it’s on.

I’ve already told you about Scottish synthpop band Prides’ album earlier this year (scroll down, it’s No. 1 on the list) and now they’re featuring on the new single of producer duo Loadstar.
Keeping Me High combines typical Drum & Base features and Loadstar’s production talent with the alternative sound of Prides by picking up some elements of the bands former songs.

The song sadly isn’t on other platforms/streaming services than Soundcloud yet, so it’s not on the Spotify playlist, but it’s worth a listen. It’s Swedish band Violet Days second single and a real gem. It’s one of those bright pop songs, that are very catchy and fun.
Their sound reminds me a little of Ellie Goulding paired with Taylor Swift. The band’s debut album will be released some time next year. They’re definitely on my “bands to keep an eye on” list now.

What do you think of this weeks choices? Let me know, I’d love to hear from you.