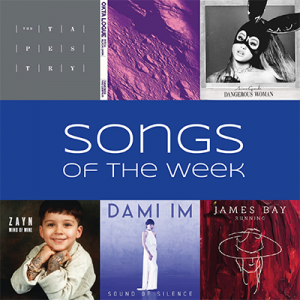 It’s a new week, which means that there’s new music and I’ve got an interesting mix of the newest released tracks for you as every Monday.

If you want to have a look on what has been on the previous lists this this year, check out my Songs of 2016 playlist on Spotify and follow it to stay updated. As you probably know, I’m adding six new songs every week, which I’m presenting to you every Monday.

This week’s list is featuring one song, that could get really big this year, a powerful Eurovision Song Contest entry, a very unusual artist choice for me and a beautifully emotional charity single.

But I will keep you guessing for a bit and let’s start with two new indie tracks I really enjoy listening to first.

Firstly, there’s We Talk by The Tapestry, an indie post-punk band from a little town near Manchester in England. The song is catchy and makes you dance, just the way I like my indie.

And secondly there’s Pitch Black Dark by Okta Logue, an indie-rock band from Griesheim in Germany. They’re mixing psychedelic rock with modern indie elements and I really enjoy that. The song is the first single taken from their album Diamonds and Despair which will be released on 15th April this year.

Ariana Grande‘s new track is called Dangerous Woman. The jazzy new single by the former Nickelodeon star could be featuring on the Fifty Shades Darker soundtrack – not just because it sounds a bit like The Weeknd’s Earned it, but also the lyrics would fit the Fifty Shades of Grey theme perfectly. Could she step into Ellie Goulding’s footsteps landing a big hit with this single? It’s definitely a great song, we’ll have to wait and see.

Now it’s time for the already announced unusual artist choice of mine. LIKE I WOULD is the second solo single released by former One Direction member ZAYN. I wasn’t a fan of the teenie band, but now this guy’s going solo he’s kind of grown on me, just like his first single Pillow Talk somehow has. I didn’t like it when I  first heard it, but it got better every time I heard it. With his new song taken from his debut album Mind of Mine it’s a bit different. I already like it after listening two times, due to its great electronic beat and to be fair his voice is quite good as well.

Next up it’s Australia’s Eurovision Song Contest entry – Sound of Silence by Dami Im. I’m still a bit confused by the continent on the other side of the earth taking part in an European songwriting competition, but they know what they’re doing. The track is a for the contest typical power ballad with a catchy chorus and meaningful lyrics. The song is about the world we live in today – “a world where it is easy to be connected every minute of the day but along with this connection you can feel alone and isolated” says Dami Im herself. Surely a performance to look forward to in this year’s ESC.

Last but not least, it’s time for James Bay‘s Sport Relief single Running. Sport Relief is a British charity collecting money to help people around the UK and the world’s poorest countries. Running is taken from James Bay’s debut album Chaos And The Calm, that made him into one of the best new artists in 2015. The song is a super emotional ballad proving how stunning the singer-songwriter’s voice is.

So that’s it for this week, I hope you enjoyed it. Which one of the songs is your favourite? Let me know in the comments.