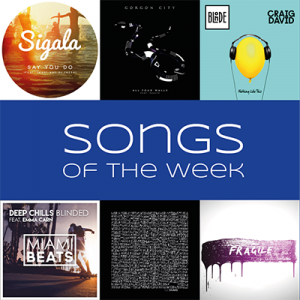 It’s officially spring, it’s sunny outside and it feels a bit like summer is coming (who cares about winter after all).

On that occasion and the fact that I can’t get that Sigala song out of my head for quite some time now, I decided to do a dance/house playlist this week and I hope you will enjoy it as much as I do.

And maybe one of the songs will be this years summer hit, we will see… Two of the featuring artists on today’s songs have been on former playlists already and I’m glad they got to be part of great new songs so soon – I’m talking about Vaults (SOTW8) and Emma Carn (SOTW1).

For all the featured songs on my Songs of the Week feature give my Songs of 2016 playlist on Spotify a go and follow it to stay updated. But first here’s this week’s new additions to celebrate the arrival of spring.

The first song on the list, is the one that inspired me to do an EDM special – Say You Do by Sigala, Imani and DJ Fresh. British producer Sigala is doing everything right since he started releasing singles last year. Every song’s a hit – I’m quite sure you have heard Easy Love and Sweet Lovin’ as the songs have been playing everywhere. I can’t wait for his debut album to be ready, it looks like it’s going to be a great one.

Another great new dance track released last Friday is English garage duo Gorgon City’s All Four Walls which is featuring the London based trio Vaults whose latest single Midnight River which I really loved. And I’m enjoying this new song as well. It’s a great mix of house and garage sounds and the vocals are great as well.

It’s also a good year for Craig David. After his newest hit single When the Bassline Drops he’s now featuring on production duo Blonde’s new track which could get big as well. Nothing Like This is really catchy and it combines R&B and House in a way that is making the song great chart material.

Blinded is the newest release by Italian DJ Deep Chills and singer-songwriter Emma Carn her soft vocals and the deep house sound make up a relaxed tune which is perfect for the hopefully warm an sunny days ahead.

Middle by DJ Snake and Bipolar Sunshine has been suggested by the lovely Lauren and this is what she said about this song: “Middle is one of them songs which makes you feel all happy inside no matter what mood you’re in with the great beats and the soothing singing voice of Bipolar Sunshine, who is one of my favourite artists”. Sounds like a great song, doesn’t it?

The last song on today’s list is Fragile, the latest single by Kygo, one of my favourite deep house producers. The vocals on the song are by Labrinth whose voice is one of these rough special voices you’ve got to adore. Kygo’s debut album Cloud Nine will be released in May and I am looking forward to hearing even more great tracks as well as the already released ones on there.

So that’s it again for this week, I hope you enjoy the songs. Which one is your favourite? Let me know in the comments below. And of course feel free to contact me if you’ve got any suggestions for next week.