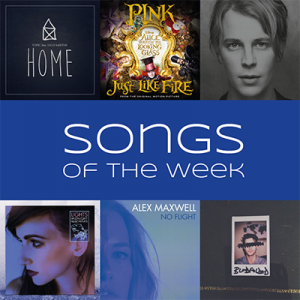 To be honest, it has not been easy to find songs for this week’s list – it has been a weak New Music Friday…

But I have found some good company for the two new releases on this Songs of the Week list. These are this week’s songs:

Home by producer Topic and singer-songwriter Nico Santos came on the radio when I was in the car last week and I really enjoyed it, hence I thought it’s a good choice for this week’s list. It is a great calm electronic pop song.

P!nk is back and has recorded a song for the new Alice Through the Looking Glass movie, which is called Just Like Fire.

The exciting new single from Tom Odell is called Magnetised and is the first new release from his upcoming second album Wrong Crowd. He sounds (and looks) more grown up.

Canadian singer-songwriter LIGHTS and her album Midnight Machines has been recommended to me by the amazing Ine from Argentina. That’s what she said (see what I did there Ine?): “she [LIGHTS] makes electronic music and later releases really nice acoustic versions of her own songs, that seem completely different. This last album is absolutely brilliant.”
And after listening to said album, I must admit she’s right – it is beautiful. Same Sea is my favourite song from it and if you like it, you should listen to the full album.

No Flight by Alex Maxwell is the beautiful new song by Alex Maxwell, a singer-songwriter from London. The bluesy guitar sounds and her soft lilting vocals turns the track into a great second single and hopefully helps her to get more known in the pop business.

The sixth song of this week isn’t available on Spotify yet, but it’s a good one. It is the first single release of Irish singer-songwriter Tim Chadwick called Blindfolded. It’s gripping, energetic and catchy – a brilliant debut single that turns Tim Chadwick into an exciting new artist.