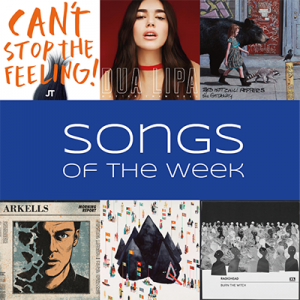 Radiohead are back, the Red Hot Chili Peppers are back and also Justin Timberlake has finally released new music – what a week, let’s dive into the music right away.

The first song on this week’s playlist is Justin Timberlake’s new song which is called Can’t Stop The Feeling. It is part of the soundtrack from the upcoming animation movie Trolls and it might become the summerhit of the year. It’s happy and makes you bop your head or even dance.

Hotter Then Hell is the next single by my favourite new singer-songwriter of the year 2016 – Dua Lipa. I really enjoy her vocals on every track and this song is particularly sexy and catchy, it’s great.

After five years of silence there’s new music by the Red Hot Chili Peppers. The first single release of their upcoming album The Getaway is called Dark Necessities. It is funky and cool and reminds of some of their older songs from ten years ago.

Private School is by Canadian rock band Arkells. The lyrics are a bit weird, but the music is funky and cool.

Young the Giant is an American indie rock band who are releasing their third album Home Of The Strange in August. The new single which is the second to be released from the upcoming record is called Something To Believe In. Its haunting lyrics and great guitar chords make it a great choice for a single release.

And the last song is the highlight of the week: Radiohead’s new single Burn the Witch. They have surprised everyone with their album release yesterday. The new record is called A Moon Shaped Pool and is great! Burn the Witch is the first official single release and it is really good. It sounds ambient, a bit experimental and emotional.

That’s it already. Do you like this week’s songs? Which one is your favourite? I would love to hear from you.