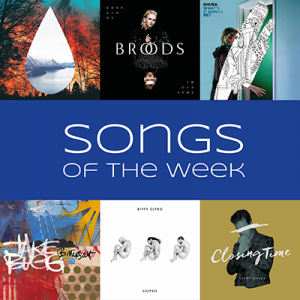 Hello there – I’m back and there’s a lot of new music to dive into this week, so let’s get straight to it.

The first one on the Songs of the Week list is a brand new track by the makers of hit song Rather Be. Clean Bandit have teamed up with the UK’s latest X Factor winner Louisa Johnson for her first single since her winner’s song Forever Young. Tears is yet another masterpiece of the band when it comes to mixing classical instruments with electronic sounds and Louisa Johnson’s voice sounds really powerful and good on it.

Secondly there’s a new track by the brother-sister-duo Broods from New Zealand. Couldn’t Believe is an electronic pop track that reminds me a little of CHVRCHES music and sounds very airy and happy. It’s part of their upcoming second album Conscious, which will be released on 24th June.

What’s It Gonna Be is Shura’s new single after the great song that was Touch. I heard her talk about the new song on Annie Mac’s show on BBC Radio 1 and she said it “is about fancying someone and maybe having a kind of connection and realising that it’s probably not gonna happen.” Even though the topic isn’t the happiest, the sound of the track is upbeat and groovy, but without loosing its emotions.

Also, there’s another new track by Jake Bugg called Bitter Salt. I’m always fascinated by his very special voice and I like this song a lot. It’s full of upbeat drums and there is a great electric guitar solo in it as well – it has everything a great rock track needs.

Speaking of rock songs, Biffy Clyro have released another track from their upcoming album Ellipsis for which I really can’t wait to arrive on my doorstep in a few weeks. Animal Style makes me even more excited for the full record as it’s a lot of fun to listen to and of course to bang your head.

The last song for this week is Closing Time by American singer-songwriter Trent Dabbs. To be honest I had never heard of him before and was a bit shocked, that he is about to release his 10th album. But this song is making me listen to more of his music as it’s happy and dreamy and just what I need sometimes.