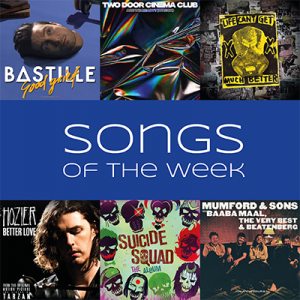 What a week when it comes to new music releases. So many good songs came out last Friday, that it was quite hard to decide which six to pick. There were some obvious choices, but the rest of it really wasn’t easy to narrow down.

Also, I kind of wanted to put the new Bastille song on there six times, to make you listen to it on repeat as I am so excited about it. But luckily for you, I decided you should choose to do it yourself, if you want to. So here’s this weeks list with six different songs.

Bastille have chosen the best way to come back with new music – a song that on the one hand sounds quite new and different to their previous singles and on the other hand has the typical depressing yet beautiful lyrics and musical elements. Good Grief merges exactly these confusing and depressing lyrics with a very catchy and also slightly happy sound which turns it into a fascinating first single. Their album Wild World will be released later this year and it is looking like it’s going to be fantastic!

Another band who finally released new music after three years is Two Door Cinema Club. The indie rock band from Nothern Ireland has premiered their new single Are We Ready? (Wreck) last week and it sounds great. I would say the answer is yes. Yes, we’re ready to hear the new album Gameshow in October.

Life Can’t Get Much Better is the next new single after Life Changes from Good Charlotte. I’m starting to wonder if the next one will have the word life in its title as well or if the new album will be called Life. Sadly, it isn’t. It will be called Youth Authority and will be available on 15th July. Nevertheless, the newest single is such a happy track, it puts you in a good mood instantly.

Thanks to the makers of The Legend Of Tarzan and the accompanying soundtrack we also get to hear new original music from Hozier. The new song he has written for the Disney film is called Better Love and I forgot how special his voice and style is – it’s a joy to listen to.

Speaking of music from movie soundtracks, Twenty One Pilots have recorded a song for the film Suicide Squad. Heathens sounds mysterious and creepy but still fun – I hope that’s what the film is like because that would be brilliant.

The last track for this week is a bit older, but the EP it is taken from is brand new – I’m talking about Johannesburg by Mumford & Sons and There Will Be Time is my favourite track from it, so I put it on this week’s list. Nevertheless you should listen to all five songs on Johannesburg because it has an awesome sound combining the sound of the British folk rockers with the African elements from Senegalese vocalist Baaba Maal and Cape town band Beatenberg.

Here you go, another six new tracks added to the Songs of 2016 list. I hope you enjoy them and if you do or if you don’t why not let me know? What was your favourite new song that came out last Friday? Just leave a comment below, I love hearing from you.

A Week In England [Part I]