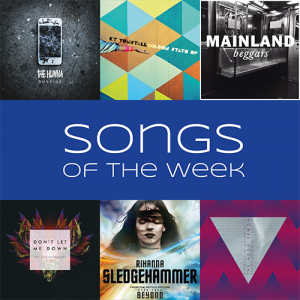 This week is so different to the last one. Whilst it was very hard to pick the best of the many great songs last Monday, this week it’s hard to find six songs I genuinely like.

There’s a slightly strange remake of the Ghostbusters song by Fall Out Boy and Missy Elliott, which is just confusing (and normaly I’m a fan of nearly everything FallOut Boy do…) and then there’s acoustic or duet versions of songs we already heard a lot before, like James Bay’s Craving and Troye Sivan’s WILD – don’t get me wrong, they’re good songs, but not very exciting.

Nevertheless I have done my best to pick the best (quite) new music for you to listen to this week.

Bonfire by The Hunna is the first song on this week’s list. The song has been released on Spotify last Friday and is leading up to the release of the indie rock band’s debut album 100. It sounds quite exciting and I love the guitars on it.

The second song for today is by Scottish singer KT Tunstall, who’s been releasing music for over ten years now. You might remember her song Suddenly I See (if not, click here) and her newest single is called All Or Nothing and it’s nearly as catchy and definitely a really great song.

Mainland’s Beggars -is a proper punk pop and 90’s alternative mix. “Don’t stop, don’t give up” seems to be the main message of the song and therefore it’s really motivating, not only lyrically, also the music is quite uplifting.

Don’t Let Me Down by The Chainsmokers featuring Daya was a track of the day on BBC Radio 1 last week or the week before and I liked hearing it all day on the radio. It was already released in May, but I seem to have missed it. However, it’s not too late to make it a Song of the Week, isn’t it?

Rihanna has dived into the Science Fiction world and premiered her song for the Star Trek Beyond soundtrack: Sledgehammer. The song sounds epic and I hope that’s a good sign for the film. The song was written by Sia and you can hear that instantly – at first I wasn’t even sure if it is really Rihanna singing it.

Speaking of Sia, she has recorded a song for the soundtrack of The Neon Demon and it is called Waving Goodbye. She’s teamed up with Diplo for this song andyou can hear his dance-hall influences. This combined with Sia’s extraordinary voice and style makes a great electronic pop track.

Here you go, another six new tracks added to the Songs of 2016 list. I hope you enjoy them and if you do or if you don’t, why not let me know? What was your favourite new song that came out last Friday? Just leave a comment below, I love hearing from you.