Halsey might be the newcomer of 2015. I downloaded her album a few weeks ago and I’m in love.

Halsey is a 20-year-old, American singer songwriter and BADLANDS is her brilliant debut album, that came out this August. She made her way into the music business by uploading covers on YouTube, which were that good that they got signed to a record label.

After touring the US  in 2014/2015 with lots of different artists, including The Kooks and Imagine Dragons, it was about time for her record to hit the stores and streaming services.

The first song of BADLANDS – Castle – could as well be a Lorde song soundwise, and I think that’s one of the reason I instantly adored Halsey’s sound. It gets different throughout the record, more individual, simple but effective. I love that. Roman Holiday sounds a little like it could be one of the newest Taylor Swift songs, which isn’t a bad thing either. There could be a lot of hits beneath the songs of this album, nearly every one of them has got something special.

If I had to name my three favourite songs, I’d say they’re New Americana, Gasoline and Hold Me Down. 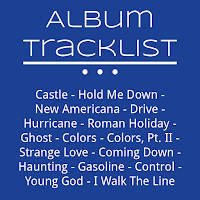 What I love about Halsey’s voice is that it sounds cute and strong at the same time. Some songs like Colors and Strange Love have a slightly aggressive tone, others are beautifully sad, for example Young God.

Some songs feel like a whole short film with music and sound effects in your head when you close your eyes whilst listening, like Drive for example. The songs are very personal and tell the story of Halsey’s life so far, which was shaped by her struggeling with her sexuality and her mental illness. The outcome is touching, disturbing and addicting music.
I can only recommend to listen to this album, it’s amazing and you’ll loose yourself in the storytelling. And after you’ve done that, tell me your three favourite songs in the comments.